Should Your Kids Head Soccer Balls?

I have no idea who’s heading the ball that often unless they play for the English Premiere League or hang out in the backyard juggling with just their heads.

Posted in In the News | Tagged brain injury, soccer | 2 Responses 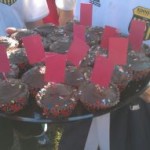 We were David and they were Goliath, and the game was tied.

Posted in Boys will be boys, Days Like This | Tagged soccer, soccer coach | Leave a response 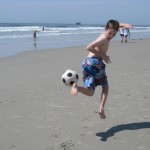 No Snooki. Just a boy and his soccer ball on the beach.

What happens when one mom finds out that nine-years-old is “too late” to start playing youth soccer? She gets soccer mommed.

Posted in Boys will be boys, Days Like This, Wordless Wednesday | Tagged snow, soccer | Leave a response

For a Girl: It's Hard to Feel Tough When You're a Swift Cloud

I tried to explain to two eighth grade girls, older sisters of some boys on the soccer team I coach, about the old dark days of girls’ sports.

What happens when one would-be soccer mom finds out it may be too late for her fourth grader to start a career in soccer?