If You Fall Behind, I Will Wait for You

Unfortunately, once my family was into it, there was no turning back.

Posted in All in the family, Cancer Stinks | Tagged cancer, family, support | Leave a response

I Shall Wear Teal with Kelly Ripa

Anyhow, it’s all in honor of National Ovarian Cancer Awareness Month, which is this month, starting with tomorrow’s National Teal Day. Here’s the official info on that: 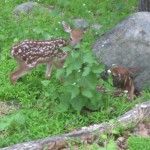 Live Each Day Like There's a Lot of Them Left

Maybe I shouldn’t have been the person gathering the papers entitled “End of Life.” Or maybe I was the perfect person for it. It’s hard to say.

Hats Off to Hope

The significance of my son wearing that particular hat for his D.A.R.E. program graduation, a de facto fifth grade graduation ceremony, was not lost on me

Posted in All in the family, Cancer Stinks | Tagged cancer, hope, remission | Leave a response

The Standing Ovation for the Right Girl

Then I turned to the audience and said, “I think Lily deserves a standing ovation, don’t you?”

A Bucket of Smencils: Goodbye to a Child

Childhood feels sweeter this week, even as the bitter taste of loss lingers in our mouths