GUEST POST: This is Your Teen’s Brain on Risk 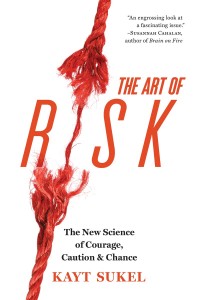 Now that my daughter turned 10, I want to tell her to slow down, take her time to grow up, because, if she’s anything like me, things are about to get a little bit crazy around here. If my mother were writing this post, she’d start pointing out her gray hairs and explain how I gave her each and every one during my adolescent years. Her stories would likely leave you equal parts amused and horrified. And she’d finish by dramatically stating, “I don’t think Kayt learned how to think things through until she finished college!”

It’s easy to say that teens don’t think. That the teenage brain is immature and simply not working up to its true potential. Heck, parents have been saying some iteration of that stuff since the dawn of time. I’m already tempted to utter such things about my own daughter—and she hasn’t even hit puberty yet. But, as I learned while researching THE ART OF RISK:  THE NEW SCIENCE OF COURAGE, CAUTION, AND CHANCE, the adolescent brain, while it has its fair share of quirks, comes with a lot of benefits.

We all know that adolescence isn’t an easy process—for the teens, or anyone who has to interact with them. It is a volatile time, both physically and emotionally. Abigail Baird, a brain researcher at Vassar College, says that what you see happening on the outside is happening inside the teenage brain as well.

“You see that explosive growth and the gawkiness—kids suddenly shooting up with long, clumsy legs and arms. What shouldn’t be surprising then is that there’s that same gawkiness when we’re talking about the brain, too. It’s not an exaggeration to say that things are exploding in terms of brain growth,” she told me. “Everything is changing and it’s changing really, really fast.”

The brain is changing dramatically—and that results in the kinds of typical teenage risk-taking or “stupidity” we parents are often tasked with cleaning up. But Baird cautions that it is not “stupidity” and we’d be wrong to call it so. All those crazy-making brain changes are preparing the brain for unprecedented learning. And, as such, they are critical to helping our teens grow up and be the smart, capable adults they need to become so they won’t live forever in our basements.

Studies out of Baird’s lab and others suggest that the out-of-control emotions and bewildering motivations that so many parents wish they could quash are actually important to that learning. “The teen years require a lot of trial and error,” Baird argues. “If everything wasn’t so dramatic and important and emotional, adolescents wouldn’t have the motivation they need to get back up and do it again when they fail. And if they are going to gain the experience they need to learn how to make good decisions, they have to get back up and do it again. And again. And again.”

What may be harder is for us parents to get back up again and again – and let our teens make these silly mistakes biology has set them up to make. And yet we have to do it. If we don’t, they won’t gain the necessary experience to become thoughtful and proficient in this game of life. And I’m sorry. If my daughter remains a perpetual adolescent, unable to take care of herself, she simply cannot live in my basement. Neither one of us would survive.

So I prepare myself.  And as I watch my daughter experiment with make-up, dystopian novels, and the weird social games that girls like to play, I realize that, like it or not, adolescence is knocking at the door. I can’t set the bolt. I can’t pretend I’m not home. I can’t scream, “Too young!” and try to push her towards the childish things she no longer needs but bring all manner of comfort to me.

I have to take my own risk, the hardest risk perhaps, and let her go.  And, then, somehow, even as she pushes me away (and, trust me, she is going to push all my buttons), provide her a soft(er) place to land—and then encourage her to dust herself off and do it all over again.

Everything is changing and it’s changing really, really fast. I’m doing my best to be ready. I hope I’m up to the challenge. 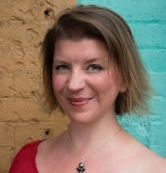 Kayt Sukel earned a BS in cognitive psychology from Carnegie Mellon University and a MS in engineering psychology from the Georgia Institute of Technology. Much of her work can be found at kaytsukel.com, including stories about out-of-body experiences, computer models of schizophrenia, and exotic travel with young children. She lives outside Houston and frequently overshares on Twitter as @kaytsukel.