Why It Hurts So Much When Your Kids Mess Up 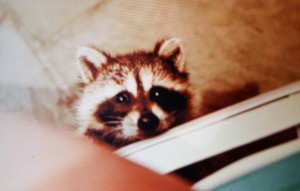 Before I raised children, I was a raccoon mom. Oh the things they taught me.

On Thanksgiving night, one of my offspring did a dumb thing. Scratch that: two dumb things, one involving two cars in my driveway and one involving a curfew. It morphed into a middle-of-the-night yelling match and ended at the auto body shop.

I don’t need to go into details here. You can insert your own kids’ double-whammy dumb thing and you’ll understand how I felt.

The next morning, this child made the case that these two incidents were unrelated to each other despite happening at the same time, claiming that the part that was an accident could have easily happened without the part that was not.

My head agreed. My pointer finger did not…

I decided it was time to tell my son about the children I had before him–two baby raccoons who had lost their mother. I was 15 and had nothing else to do that summer, and the lady from the ASPCA knew I’d make a good raccoon mom. So I got the raccoons their distemper and rabies shots, and I went about the business of raising babies, whom I named Stephanie and Michael.

First, I bottle-fed them baby formula. Soon, I chopped up fruit in my mom’s Cuisinart, and they ate half and put the other half in my hair and ears as they climbed all over me. I put them claws-first on trees and tapped their butts to make them climb up. I took them for walks, and I kept them the heck away from the cat.

I was asleep one night, when I awoke to the sound of my babies’ cries from their cage in the backyard. I ran outside to find them soaked from an unexpected rainstorm, so I dried them off and put fresh towels in their cage, which I covered with a tarp. I put them back in their cage and I went back to bed.

I did all this to prepare them to leave me. They weren’t pets, and they wouldn’t be mine forever.

Then one day I was feeding Michael when he bit my pointer finger. My head knew that he was a wild animal who was probably spooked by something I did, but it hurt. It hurt my finger, and more importantly, it hurt my feelings. I was his mother–without me, he’d be dead. And here, he did something I never expected, something awful and painful. Something that made me question whether I was a good mom.

“Last night,” I told my son the morning after his double-whammy in the driveway, “you bit my finger.” He softened, nodded, and apologized. In that moment, he understood it wasn’t just about what he’d done the night before. It was about what I’ve been doing for the past 18 years. And it always is.

At the end of my summer as a raccoon mom, I let Stephanie and Michael go. At first, they came back often–for a while, during the daytime–for some snacks on the patio. Eventually, they showed up at night, sometimes with a bunch of friends. But ultimately, they left me, their mother, to go live in the woods where they belonged.

My finger healed long before that, but a little piece of the pain stays in my heart as a reminder of the first time I was a mother. I like to think it prepared me for motherhood’s deep well of hurt that’s insulated in layers of pink, fluffy love. A drop was added to that well on Thanksgiving night in the driveway. But the next morning, we added more insulation with a hug.

And a trip to the auto body shop.

Posted in All in the family, Boys will be boys | Tagged cars and teens, moms and feelings, punishment, raising teens | Leave a response