Can U Pick Me Up Plz

All summer long, I’d get the same text from my 16 year-old son, sometimes several times per day: 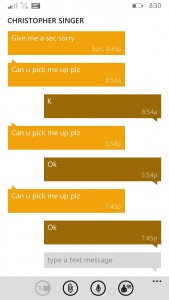 This meant I was to stop working, get in the car, and go pick him up wherever I’d dropped him off–at the lake, friends’ houses, or the corner of a relatively flat road where he’d just finished running 8 miles as training for the cross country team.

Later, he’d get a ride from his brother or a friend to his next location and then, a few hours later, I’d get that text, the theme of the Summer of 2015:

Can u pick me up plz

At this point in his teenaged life, I have been reduced to his very own Uber. And ATM. And short order cook.

But the rides end next month when he gets his driver’s license and a used car to get around this town and its numerous roads with “hill” or “mountain” in the title. We have no sidewalks, taxis, or buses, except the ones out on the highway that take commuters to New York City. This is a driver’s town, and soon, everyone in my house will be drivers.

While I look forward to changing the theme from “Can u pick me up plz” to “Wow, I just worked four hours in a row without an interruption,” I am well aware of what I will be losing when my youngest gets his driver’s license, and it feels bittersweet.

Carting my sons and their friends around since the late 90’s has provided me with the privilege of having the kind of peek into their lives that you just can’t get when they can get around town.

My car is where I’ve found out about everything from (tomorrow?!) soccer registration deadlines to who’s got a crush on who else to which household lets tweens watch Rated R movies with blood and gore, and which one shows boobies. It’s where I discovered that they wanted to take up the accordion or to give up baseball, and it’s where we planned family vacations and headed out on college tours.

Most importantly, it’s where my sons have told me what they can’t (or won’t) when we’re face-to-face, thanks to the side-by-side, don’t-look-at-me confessional that is the front passenger seat of my car. Especially with boys, you just can’t crack that protective inner shell while you’re shouting at the back of their heads, “Drive carefully!”

But it’s a short-lived pause, as I’ve learned from my older son. Kids get their wheels and disappear for a while–both physically and emotionally. And then they come back, no longer needing the side-by-side, don’t-look-at-me confessional, instead letting you into their inner sanctum over dinner for two on the deck.

The key is to let them go and trust that they will come back. Plz.