My friends’ kids are leaving. They’re packing up and heading to college for the first time, having graduated from high school in June. I see photos of their new dorm rooms on Facebook, the bed made by Mom, the suitcase lugged there by Dad. And then there’s the obligatory shot of the kids–now adults–standing with their parents for one last photo before they head off to an orientation meeting with their new roommates. They look excited, and a little scared.

Mom and Dad, meanwhile, try hard to look both proud and ready for this drastic adjustment. But deep in their eyes, there’s a wistful sadness with a touch of alarm, as though someone had suddenly fast forwarded their lives from their kids’ first day of kindergarten to college. Surely it can’t be time to leave their babies so far from home already. Is it?

Here at my house, we are on deck.

In less than two weeks, the summer will be over and the college application process will begin. There will be forms to fill out and essays to write, and for my son the future art student, a portfolio to finish. It will be a year of lasts–the last cross country season, the last spirit week, the last back-to-school night–followed by my last year of lasts with my youngest child. After that, I’ll be an empty nester, standing with my adult son for one last photo in the dorm room, wondering who pushed the fast-forward button from kindergarten.

I spent much of the summer before the summer before college letting go, or at least, letting my sons be. That meant dropping one kid off for three weeks at a precollege art program in New York City and the other at the edge of a hiking trail with a sleeping bag, a back pack, and two of his buddies.

Meanwhile, I watched mothers sitting with their young sons in their laps on beaches, in parks, and in restaurants, wishing I could have a few minutes of that kind of huggy, kissy love that boys give their moms until puberty comes along and ruins it. As it should.

This is the natural order of things, to raise our kids to leave us. To not need us so much. To figure out how to operate the washer machines in the dorm basement and how to get home on a holiday weekend among thousands and thousands of other travelers. And I’ve only got a year left to get it right.

Last week, my soon-to-be senior plunked down his pizza delivery earnings on a plane ticket to Houston to visit his girlfriend–the one he met at the precollege program in New York. Foul weather in Charlotte, where his connecting flight would take off, left him sitting on a tarmac at LaGuardia much of the afternoon. He missed his connecting flight, and had to stand in a very long line to try to get onto another flight to Houston.

I did my best to empathize and advise, but it wasn’t my job to fix it, especially from an author event in an apartment in Brooklyn that evening. Either he’d figure out how to get on a flight, or he’d learn how to sleep on the chairs at Charlotte Douglas Airport. I’d spent the years since kindergarten preparing him for this moment. I’d raised him to leave me. Mommy couldn’t just swing by and pick him up and make everything okay. That’s no longer my job.

He managed to get a boarding pass for the last flight to Houston. Then he went to dinner, first texting me this photo: 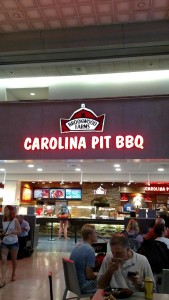 I went down to the East River to think about what it means to raise a child to a man, texting him this photo: 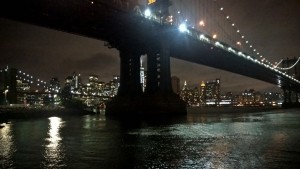 We’ve already started our new lives without each other, before we are finally and permanently without each other. The huggy, kissy days are long behind us, but the love is still there. It’s fitting that I stood underneath a bridge as I realized this as this era–the summer before the summer before college–draws to a close. We are each heading elsewhere, but we are forever connected to each other. We can always come back, if only for moments at a time.

Here, we are on deck, and yet, in many ways, we’ve already left. This is exciting and scary and alarming, as it should be. And it’s what I’ve been preparing us both for since the first day of kindergarten.