The Most Connected, Disconnected Generation 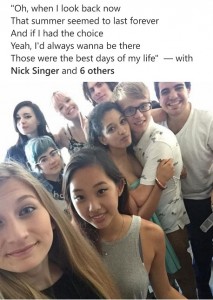 The kids were crying and hugging each other, declaring “Love you!” whenever one of them piled their belongings into a parent’s car or a New York City taxi to leave for home. Their heartbreak was palpable, their connection undeniable.

I was watching this going on around me as I sat on the bench last weekend outside the art school where my son had spent the previous three weeks for a precollege course in graphic design. Dozens of high school kids–the generation that spells “you are” as “u r” to save time as they text and walk–were giving each other the kind of teary farewells I hadn’t seen since I’d packed up my trunk and left Pleasant Bay Camp for the last time decades earlier.

Only, these kids were taking group selfies between hugs and promising to Skype later from their homes in Queens, New Jersey, Texas, California–and even Peru. But their promises to “c u soon!” wouldn’t be wishful thinking because they weren’t predicated on permission from their parents. They can contact each other whenever they darn well feel like it. And they do.

“I’m so sad!” one girl declared on a group text that came to my son’s phone–its glass shattered from having fallen off the top bunk–before our car had even pulled away from the curb in front of the dorm.

Even as they were reuniting with their families, they were still connected to each other in a way that my generation never could be, because we didn’t have the technology. We had phones tethered to the wall by long, spiral cords and shouts of, “That’s a long distance call! Wrap it up now!”

But my son’s generation can contact each other from the phones in their pockets or purses anytime, from anywhere. Like at 1 o’clock this morning, for instance, when I found my son group-Skyping his art school posse from our kitchen while he poured himself a bowl of cereal.

Also, because cellular technology and an unwavering desire to stay connected keep the most disconnected generation together even when they’re apart.

I say “disconnected,” because of the numerous studies and articles that have declared that today’s teens spend so much time with their faces glued to screens, they don’t know how to have face-to-face conversations. It makes them bullies or suicidal teens with poor mental health who sit next to each other while they text. I pointed this out to my son.

“Sometimes we text while we’re together because we’ve already said all there is to say when we were apart,” he explained. In other words, there’s no need to warm up to each other when you never cool down. In those moments, they may appear to be disconnected when really, they’re more connected than my fellow campers ever were outside of Pleasant Bay.

Plus, they often say what they have to say publicly, like when my son’s roommate posted a photo of the two of them on Facebook with the caption, “Best roommate ever!!!!!” Or the shot above of the whole crew on their last day at school, with one of them quoting a Bryan Adams song to capture with words what was in their hearts. Thanks to technology, they get to share and acknowledge each other’s feelings when they aren’t even together, providing support beyond their goodbyes to each other.

A year from now, I hope to have the pleasure of watching this group’s in-person reunion from the bench outside their dorm, should they wind up going to college there. The love will be palpable, their connection, undeniable.

One response to “The Most Connected, Disconnected Generation”