Raising Your Kids to Leave You 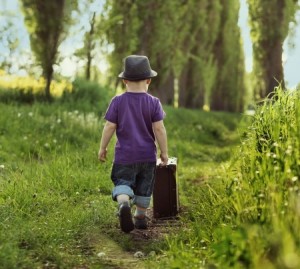 The summer I was nine, I called my parents at home to ask for another week at camp–and I kept asking for additional weeks, until I ran out of summer. In all, I stretched my first time away from home from two to five weeks.

My kids had no such experience, mainly because the current pricing for two kids for two months at sleepaway camp costs more than my mortgage and property taxes for one year.

Instead, they had one week per summer at a Boy Scouts camp about an hour from our house. It was barely enough time to miss the comforts of home–seven days punctuated by what I thought was the most ridiculous interruption: Parents were allowed to visit on Wednesday night.

I never visited, but their father did, in part because he was a Scouts master or some such thing and had to sign off on the troop’s merit badges. Yet plenty of other parents went too, even the ones who weren’t Scout masters. It’s what our generation of parents does. We check in. We text. We connect with our kids even when we’re not together.

But I thought that the visit interrupted the natural flow of their scarce time away from home, when kids discover who they are when they’re not with their parents.

It’s easy to dismiss the desire to connect with our kids as helicopter parenting, but true helicopter parents micromanage every homework assignment, every grade, every friendship, every moment of their kids lives. The rest of us, however, have been sucked to a modern parenting culture that puts value on Quality Time, “making memories,” and creating “teachable moments,” even when you’re just going out to buy some friggin’ milk. We are encouraged to play with our kids, instead of letting them play on their own, as evidenced by modern board game commercials. And we’re tethered to them by smart phones, which allow us all to reach one another any time, from any where, for any reason–or for none at all.

I could have easily fallen into this trap, having begged God to let me see my kids grow up back when they were in elementary school and I was on the oncology floor at New York Hospital, trying to shrink the six-inch tumor in my chest. I could have decided to make every moment of time that I might not have gotten with my kids if cancer had won cultivating Quality Time, making memories, and creating teachable moments. Instead, I thanked God for giving me the chance to continue what I’d been doing before cancer knocked down our door:

Raising my kids to leave me.

So on Sunday, when my son, now a rising high school senior, got the keys to the dorm room he’ll be staying in for the next three weeks at an art school in New York City, I started thinking about leaving him.

After running around to shop for last-minute supplies and lunch in a nicer restaurant than his pocket of dollar bills–tips from his job delivering pizza–could afford, we sat in his dorm room, waiting.

It would be another three hours until the orientation meeting–mandatory for students, optional for parents. We’d run out of things to get (a flash drive, toilet paper, Doritos…), and the room wasn’t big enough for him, his roommate, his roommate’s father, and me.

“Well, I have a flight to catch,” the roommate’s dad declared, and soon he left for the West Coast. I looked at the clock and sighed. And then my son asked for his version of an additional week at camp:

“You know, Mom, you don’t have to go to orientation,” he declared. “You’re not going to school here.”

I grabbed my purse, hugged him goodbye, wished his roommate well, and headed home, so that he could do what he’s supposed to do: leave me.

2 responses to “Raising Your Kids to Leave You”