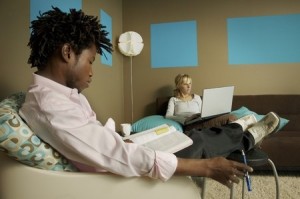 There are three things you will see on every college tour, and two of them are pretty much the same. One matters the most.

#1: Where your kid will sleep. Whether it’s a triple or a double, whether it overlooks the football field or the Boston Common, whether it has a lock or a code entry, all dorms are pretty much the same.

Chances are, you won’t choose a college based on the housing, but rather, the lack thereof. If the likelihood that your kid will roll out of bed and head to class depends on how close he or she lives in relation to class, ask your tour guide the question: “Is housing guaranteed all four years?” If the answer is no, find out where kids are commuting in from and whether it’s by foot, by school shuttle bus, or on a subway packed with commuters, when determining if where your kid will sleep affects your decision to apply.

#2 Where your kid will eat. Most campuses have at least one cafeteria where your kid can use the school food card, which will be named after the mascot. Your guide will say, “You can use your Porcupine-bucks here!” as you pass by a huge cafeteria filled with the hockey team or a Starbucks tucked in the corner of the science lab.

Where your kid will eat matters most on rural campuses where there are no Chipotles or Dunkin Donuts or grocery stores down the street to help fill up between meals. It also matters if you have an athlete who chows down a lot or a picky eater who doesn’t.

Where your kid will eat is affected by where he or she will sleep, because some dorm suites and all off campus housing have kitchens. What matters then is if your kid can cook, and if not, if he or she can subsist on instant noodle soup and popcorn for eight months.

#3 Where your kid will learn. This is the one that always matters, because it’s where your tuition money–which could buy a house– goes. Your guide will talk about student-teacher ratios, which means that your kid will either be in a lecture hall with 200 kids or a classroom with 20. The higher the ratio, the greater the likelihood he or she will play Candy Crush or Fifa on the phone during class.

What also matters is the types of majors and whether those appeal to your kid. Also, whether the school has the latest gadgets and goodies to support those majors (think: film editing equipment, science labs, laptops, etc.).

If there’s one two-part question you should absolutely ask your guide, it’s this: What percentage of students graduate with jobs and how long did it take them to graduate? The smaller the percentage of job-getters and the higher the number of years at the school mean one thing: Where your kid goes to college matters. Where he or she sleeps and eats during that time is less important unless it has a significant impact on learning.