Creative Writing for the Mathy Scientist 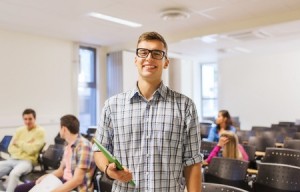 The part of my son is played by this handsome model.

If you’re a mathy, sciency 16 year-old and you have a choice between attending an awards ceremony in which you will be honored, and a creative writing class presentation, in which you have to read aloud something you wrote and then listen to a dozen other kids do the same, wouldn’t you choose the awards?

Yeah. So that’s why I was surprised when my son invited me to the creative writing class presentation. This from a kid who, over the years, has stood in my home office surrounded by boxes of my books and declared, “Mom, I don’t know how you can be a writer. I hate writing.”

But then one day last fall he said rather nonchalantly, “I’m taking creative writing this year.”

I sat very still, as though if I even smirked ever so slightly, it would spook him back to reality. Maybe to accounting class. Or coding. Or, dare I say, doubling up on math classes, just because.

“Creative writing?” I sputtered. He replied with some reason I didn’t hear or I just don’t remember, because my mathy, sciency kid was voluntarily taking CREATIVE WRITING! Not that there’s anything wrong with math and science, of course. I mean, I do write medical copy.

But this was like Derek Jeter’s kid playing football for a decade and then one day saying, “Hey, Dad. I’m gonna try out for the baseball team.”

Thanks to creative writing class, my boy was about to be introduced to the Muse, the guiding force of creativity that New Jersey’s poet laureate, Bruce Springsteen, called his “second language that you speak without thinking.” All I had to do was sit back and watch. Also, correct some spelling and punctuation now and then.

One night, I was on the phone on a Manhattan sidewalk after a day of interviewing doctors and writing medical copy, listening to my son dive right into that second language, as we discussed how he should end a thriller he’d written (in which his brother doesn’t escape the bad guy, I might add.)

“Ooooh, I know what should happen next!” he exclaimed. After we hung up, I thought, My work here is done.

The night of the presentation, he read two stories, an entertaining first-person account of the day he unexpectedly advanced to the States competition in track and field, and a fictional horror story that ended with a twist–a fisherman’s head on his own fishing hook.

Then the other kids took to the podium to share what the Muse had brought to them. It included an emotional slam poem that elicited appreciative shouts of “Wooo!” from the audience, including me; an amusing and sarcastic account of a school day that skewered the high school and everyone in it; and a gripping and clever 100-word story about the 10 seconds between when someone jumped from the burning World Trade Center and…3…2…1.

It became clear to me that this was no ordinary high school creative writing class. This was a safe and encouraging place for teenagers–the age group that grunts “fine” when you ask how their days were–to summon the Muse. In Mr. Penola’s creative writing class, these kids could shed the armor required to survive their days in the hormonal cesspool of despair that is high school and dig deep into their souls and then share what they find.

Lucky for me, there was an optional writing assignment for the parents. I opted in. The students had each supplied one word, and we had seven minutes to use 10 of them to write a story. I did it in five.

When the teacher asked for volunteers to share their stories, my son offered me up. So I took to the podium and thanked the class for the opportunity, as I had spent the day writing about menopause and this was a little more fun than that. Then I read what I had written from the words they had supplied: stoop, cottage cheese, residue, scrumptious, sickle, mug, shadow, pontoon, guacamole, fever, splendiferous, and my kid’s contribution, magnanimous. Here it is:

I never thought he would stoop so low. I mean, eating the scrumptious cottage cheese before the party even started?

For a moment, I considered being magnanimous and letting him lick the cheese residue off the mug while I said nothing. But then he started on the guacamole, shoving his face into the bowl in a hot fever, leaving a green five o’clock shadow on his face.

That’s when I had it. I grabbed him by the collar and put him in his dog cage.

Finally, I thought. It will be a splendiferous party after all!