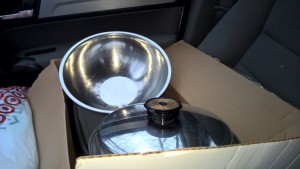 It wasn’t until after my teen sons strapped a twin mattress to the roof of my car and left me standing there that I realized that they’d tied the doors shut.  They waited for me in my son’s car, which, like mine, was filled with household items that we were donating to a family whose house had recently burned down–while their 8-year-old son is being treated for leukemia.

My boys watched me in the rearview mirrors as I sized up the situation. They’d have gotten out to help, but they know their mother all too well.

I hoisted up my right leg and put it in the open window of the driver’s seat door. Then I pulled myself up, shoved my other leg through the open window, and slid into my seat.

As I started my car, I heard my sons yell, “NASCAR!”

When we reached the house that the family is renting, the mom, whom I’d “met” only on the phone, greeted us in the driveway. Her son had just had his last chemo and was resting inside.

My sons unstrapped the mattress from my car’s roof and carried it into the garage. Next, they lugged in a “gently-worn” recliner, followed by boxes filled with mismatched utensils and glassware, mostly unchipped dinner plates, and a few decent knives that once carved Thanksgiving turkeys at my house. And then, they brought in the pièce de résistance: our old Guitar Hero guitar and a bag full of games for their Wii. I handed the mom two Target bags.

“A new mattress pad, a pillow, and sheets, so you can have something fresh,” I said. As her younger son popped into the garage, I added, “There’s a T-R-U-C-K in the bag with the pillow for the little guy.”

“I have boys, so I understand,” I said. Then I showed her a box filled with pots, bowls, and Tupperware, which came with a story:

“When I had cancer, we had no kitchen because the entire house was under construction,” I said, and she chuckled. “Yours burns down during cancer. We had gutted ours.”

“So, people cooked for us three times a week all summer long. These are the pots and bowls that no one claimed. I declare that the statute of limitations on getting them back is seven years, and we’re at eight.”

She laughed, and one of my sons carried the box into the garage and put it on an old end table we’d given them.

“Someday,” I told her, “you’ll pass that box on to another family that needs it…when you’re done with all this and your son is healthy again.”

She reached up and hugged me, squeezing me tight the way that people slapped by cancer do, as though we were saying goodbye on the dock by a battleship during World War II.

My sons waved goodbye and got back in their car, and I opened my car door and got into mine and drove home in an empty car.

If you’re reading this and you suddenly remember a pot that you left at my house eight years ago–in the dining room, because the kitchen was gutted–you’re too late. It’s busy taking care of another family dealing with cancer. Thank you twice over!