The Running Tab Other People’s Children Owe Me 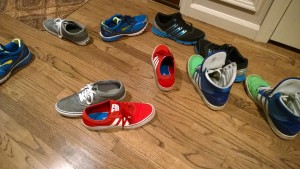 If you keep tabs, you’ll lose the true value of your kids’ friendships.

In the news today is a story about a British kindergartener who was billed a  £15.95 ($24) “no-show fee” for failing to appear at another child’s birthday party despite RSVPing. The fee is for the ski center ticket the parents of the birthday boy had to pay for even though the child’s friend didn’t show up for the event.

Naturally, the Internet is abuzz with comments about the fall of society that’s being caused by litigious parents over small infractions. I look at it as an opportunity to list my running tab of what other people’s children have cost me over the years:

The emptying of the contents of my pantry, including dozens of boxes of Girl Scout Cookies, numerous bags of chips and pretzels, and, inexplicably, countless bags of Texas Toast croutons: $3, 650.

The death of my minivan, caused in large part by 9 soccer seasons in which I carted upwards of 6 kids at a time, plus their muddy and stinky gear, sticky lollipops, errant gum, and spilled root beers: $28, 595.

A pair of shin guards, which I clearly stated were “my personal shin guards. Please return them” before they disappeared: $22

Broken–Several hockey sticks, the Wii, and at least one window screen: $525.

A child “slimed” my cat, who then licked off the toxic green gunk. Less than a year later, my cat was dead from kidney failure/cancer. Pain and suffering, plus veterinary bills: $12,000.

There is a foosball table in my living room, which is the room under my bedroom. It is frequently played by groups of teenage boys during “sleep”overs. Mental anguish: $1,000.

One child can drink a gallon of milk in one 24-hour period. He has been my child’s friend for 13 years now. We average six sleepovers per year, and we buy organic milk: $546.

After a decade-and-a-half of skateboarding, sledding, bicycling, driving (peeling out, ahem), snowblowing, and “Where are you going with the wagon, duct tape, and rope?” my driveway needs to be repaved: $11,000.

I work from home, and my office is located under the room with the Xbox and the sign that reads, “Strays Gather Here.” Lost wages: $3,000.

In other words, it’s the price you pay to raise a village, teach your kids to be good hosts, foster friendship, and be a parent. And it cancels out the tabs other parents are keeping for your kids.

Posted in All in the family, Boys will be boys, In the News | Tagged money matters, news stories, parents today | 2 Responses