The Track Meet, Where You Watch Runners Stand. 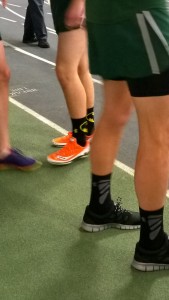 The standing to running ratio at the track meet is about 40 to 1.

It occurred to me along my trek from a meeting in New York City to the college in New Jersey where my son’s high school track meet was taking place last night that I was travelling two hours by subway, bus, and car to watch 4 minutes and 52 seconds of sports.

For the parents of mile runners out there, this realization will surely bring a shrug. For the parents of sprinters–the kids who run all of 50 or 100 meters at lightning speeds–this will surely bring an eye roll. But for this former soccer coach, it’s hard to pare down your cheering from soccer’s 90 minutes (plus overtime) to track’s couple of shouts as your kid zooms past you, followed by hours and hours of waiting for the next time he gets to run.

I have been trying to fall in love with running ever since my son quit soccer last fall to join the cross country team. Yet I’m finding it hard to stir up amorous feelings for a sport that lasts so very short and yet takes so very long, especially track. Though he ran less than five minutes in the mile race last night, and about as long as a commercial break in the 800-meter run, there was a two-hour wait between his two races inside a cramped gym with no WiFi and the smell of boiling hot dogs and sweaty people emanating throughout it.

During those two hours, I sat on the floor, read a book on my phone, and prayed for a soccer game to break out in the oval center of the track.

I don’t mind watching other people’s kids play soccer because soccer is a lively, action-packed sport. It is also running– about six miles of it per game, unless you’re a goalie, of course, who spends that time diving instead. But those six miles are punctuated by passes, shots, headers, fouls, slide tackles, injuries, close calls, elbowing, complaints to the ref, and not much standing around. It is almost never punctuated by vomiting, but running seems to have plenty of that. I’ve seen more kids throw up at the finish line than I ever saw on Saturday nights at the frat house back in college.

Running is a sport where your teammates are also your competitors, and your competitors stand around with you between races, wearing T-shirts that say, “Let’s run this town” and “Cross country keeps me off the streets,” while chit-chatting–about running of course. If I had my way, they’d all be wearing shirts that say, “My sport is your sport’s punishment,” because when my high school soccer coach didn’t think that our team tried had hard enough during a game, he’d make us run “suicides” back and forth across the field while the other team watched.

In soccer, kids watching other kids run can be humiliating for the runners.

I actually do enjoy watching my son run, but it’s over so fast, and then it’s back to watching runners stand around waiting to run. In all, my son spends .025% of the four-hour track meet running, and the rest of it standing around, waiting to run again or to go home to a hard-earned meatball sub. After all, to run that 4 minutes and 52 seconds, he had to run some 30 miles all week long in training. And that’s not even considered “punishment” in his sport. It’s just “after school.”

Next week, I’ll do it all again, making the odyssey to watch my son run, but mostly to watch kids waiting to run. I’ll bring a book and something to sit on and if I’m lucky, I’ll find a soccer game on TV while I wait.

One response to “The Track Meet, Where You Watch Runners Stand.”