Christmas Incentives for Teens: Jobs on the Knob 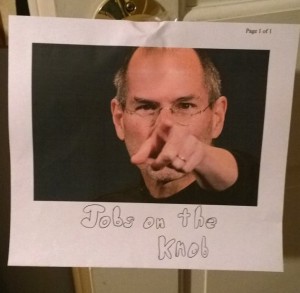 My son needs a MacBook Pro. Preferably with fourth generation, quad-core Intel processors and stunning retina display on a 15-inch screen. But whatever it is, he needs a computer that comes with an Apple logo on it.

This, we learned while touring art schools in New York and Boston this year. If my kid is going to compete with the other thousands of talented young artists for a spot at a top art college, he needs the right tools. Without an Apple computer, he is like a soccer player without cleats. This, I understand.

Yet I know nothing about Apple computers, having always owned non-Apple computers. What’s more, I am a spokesperson* for Microsoft, so for me, walking into an Apple store is like walking into Fenway Park decked out in a Yankees shirt, Yankees hat, Yankees socks, Yankees pinstripe pants, and holding a big Yankees foam finger.

But I sucked it up. You know, for the kid.

It took me a while to find the store, because I was foolishly looking for a sign that reads, “Apple.” But there is no such sign. Just two backlit Apple logos, one on each side of the entrance. No words necessary. Just use pretty icons.

Inside, I was promptly ignored by the hipster salespeople in their matching red polo shirts. Maybe it was because I was waving a Windows Phone around, and playing with the iPads. When I found the table with the MacBook Pros, I flipped through an iPad comparing one (holy crap expensive) laptop to the others. But all I could find were descriptions of laptops that all looked alike, with no special model names to distinguish them, like the “MacBookPro Art School Student 2,” perhaps. Instead, they were labeled by price, as in Pricey, More Pricey, Mortgage Payment, and Mortgage Payment + Will a Kidney Do?

I gave up on the iPad and clicked on the keyboard of one of the laptops to see if I could pull up the information of what’s under the hood, but there appeared to be no such thing on Apples. Just pretty, pretty icons that lead to nowhere.

I told him about my son, the future art school student, and about his Photoshop class in the high school and about his art portfolio for college admission and about the fact that there’s no sign that reads, “Apple” outside the store, as I stuffed my Windows Phone into my pocket.

“He’ll need this one or this one,” he explained, as he moved the screen from the More Pricey model to the Mortgage Payment model. He rambled about “retina display” and “flash storage” while I calculated how many extra hours I’d have to work to afford each laptop.

“Will it last til he’s in college without becoming useless?” I asked. “He’s a junior.”

“Oh yeah,” he assured me. “Probably midway through college.”

“But you people come out with new stuff that renders the old stuff obsolete every four months,” I said. “I’ve seen the lines of people, on the news.”

“That’s the phones,” he said, and handed me his card so I could return to the store with no name after I’d thought it over. He knew I was done for the day. Possibly the season.

But the MacBook Pro Mortgage Payment would come with strings attached for my son. He had to step up his game in school, especially in math class, where my son the artist does some of his most impressive drawings. He had to get to work on time, clean up his room, organize his backpack, pick up his brother from track practice, and work harder and smarter.

“Attitude and effort,” I explained, and he agreed to the terms.

At 17, my son is too old for Elf on the Shelf, the (creepy) doll that is moved around the house, reporting back to Santa on whether the kids are being naughty or nice. Instead, he got Jobs on the Knob, the (creepy) photo of Steve Jobs, founder of Apple, pointing at you, that’s moved around from doorknob to bedknob to cabinet knob as a reminder to my son the artist that while Mom’s working to pay for the laptop, he is, too, through attitude and effort.

Now that it’s the day before Christmas, it’s time to decide: Does he deserve the MacBook Pro, and if so, which one?

Only Jobs on the Knob knows for sure whether you’ve been naughty or nice.

*I am an Office Champion for Microsoft. That’s how come I know that if and when an Apple computer is placed under our Christmas tree, it’ll take me only a  few minutes to load the full Office suite onto it with little fuss. Why? Because Microsoft has made Office 365 available for Apple computers, iPads, and iPhones. But hey, that’s the kind of help you’d expect from people with words on the signs over their stores.

Posted in All in the family, Brand Ambassador, Days Like This, Smell Like Teen Spirit | Tagged incentives, raising teens | Leave a response