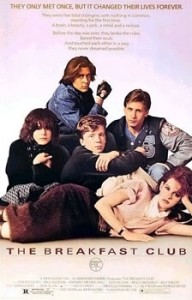 On Thanksgiving night, my kids and I watched “Stand By Me,” a movie about the 50’s that was made during the 80’s. Both eras happened before technology and culture began to change growing up in so many ways, and it made me think about what would happen if classic coming of age movies were re-shot today:

STAND BY ME: One of the parents would check on her son’s whereabouts using remote GPS through Verizon Wireless, and discovers that he is off in the woods, far from home. A helicopter-and-bloodhound search would ensue, and all four kids would be grounded for a month with no cell phones, Skype, or X-Box before any heartfelt adolescent bonding could take place.

FERRIS BUELLER’S DAY OFF: Ferris’ parade float performance would be captured on a cell phone camera and uploaded onto Facebook, where face recognition would identify and tag him. It would be reposted and reposted on people’s walls until his parents find it before Ferris even gets home that day. He’d be grounded for skipping school, and his sister would be vindicated at last. She’d also get into a sexting relationship with Charlie Sheen’s character.

MEAN GIRLS: The entire thing would take place on iPhone Chat. While at school, everyone would pretend nothing was going on.

DIRTY DANCING: Johnny Castle would be discovered by a Hollywood agent when his YouTube following hits one million, and he’d get a regular gig on Dancing with the Stars, ending his budding romance with Baby, who ends up in the corner after all, eyes on her phone, commenting on iFunny posts all night.

FAST TIMES AT RIDGEMONT HIGH: Spicolli would drop out of high school to work at a his brother’s entirely legal California marijuana dispensary.

SIXTEEN CANDLES: Jake Ryan and “The Geek” would face date rape charges after photos of a barely conscious Caroline in Jake’s father’s Rolls Royce appear on Instagram. (Seriously, how come we didn’t see it as date rape back in the 80’s?)

DRUMLINE: Due to budget cuts, the entire drumline is replaced by a drum machine and a loud speaker.

ALMOST FAMOUS: No magazine has a budget to send a journalist on tour with a band anymore, so William stays home and blogs about music he downloads illegally onto his phone during Chemistry class.

SAY ANYTHING: Lloyd doesn’t own a boom box, let alone know what one is, so he would just text a link of “In Your Eyes” on YouTube to Diane, who would immediately delete it without ever listening to it.

THE GRADUATE: Benjamin would take the first job offer that his father’s friends offer at his graduation party, because 90% of his friends have no job prospects despite their $240,000 college degrees.

BREAKFAST CLUB: The Breakfast Club kids would skip writing the required letter to Mr. Bender and instead film and edit a music video set to Taylor Swift’s “Shake it Off.” ‘Cause the haters gonna hate, hate, hate.