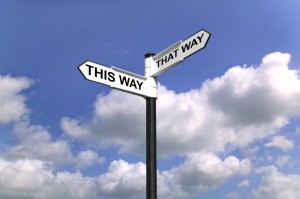 My son’s Driver’s Ed teacher wouldn’t appreciate my answers to the summer homework questions. Technically, they are wrong, but something about them is oh-so-right.

1. When should bright beams be used? When the jackwagon in the oncoming car refuses to turn his off.

2. Road surfaces are slipperiest when you decide to put off buying new tires until next year.

3. When is it legal to use your horn? When you’ve been sitting in your friend’s driveway for five minutes and you’re late for soccer practice.

4. Altering a driver’s license or showing an altered driver’s license may result in Jello shots at a dive bar with a bouncer who doesn’t believe you’re 22, but lets you in anyhow, for your impressive effort. Or, prison time and a permanent spot on the Homeland Security watch list. Times have changed, kids.

5. A flashing red traffic light means the guy in the red Corvette might slow down a tad before flooring it.

6. Crossing centerlines on a two-way roadway for passing is legal when you’re playing Grand Theft Auto with your buddies. Otherwise, stay where you are, because you haven’t been driving long enough to pull that off.

7. When nearing a steady yellow or amber traffic signal you should get the hell out of the red Corvette’s way.

8. The best way to “talk” to other drivers on the road is to use hand gestures that everyone understands.

9. The “three-second rule” can be used at any speed to help you decide whether it’s safe to eat the bagel you just dropped on the car floor.

10. If a school bus has stopped in front of a school or pick-up or let off children, a motorist must stop! Stop, or else the parents at the stop will take down your license plate and report you to the police while using hand gestures that everyone understands.

11. When driving around a curve, your vehicle tends to have half-empty Gatorade bottles and soccer balls roll to the other side of the car.

12. In order to drive in New Jersey, your car must be insured for an amount equal to the price of your grandparents’ first house.

13. If you go into a skid, you should play “Jump Around” by House of Pain and bob your head in sync. You might as well look cool before you hit the guardrail.

14. If a collision is impossible to avoid, you can lessen the impact by knowing that your mother pays for your car insurance.

15. If you miss your exit on an expressway, you should blame your passengers for making too much noise, turn down the radio, mumble curses under your breath, and then get off at the next exit while yelling at your GPS, “Shut up!”

16. If your car breaks down on any road, the first thing you should do is post it on Facebook. For the sympathy and amateur car repair advice.

17. If two cars begin to enter an uncontrolled intersection at the same time, the car that goes first is the jacked-up pick-up truck with the exhaust stacks spewing black smoke and the NRA stickers.

18. If you run off the pavement, the first thing you should do is quit texting and driving, you eejit.

19. In city driving, it is a good idea to never make eye contact with cab drivers. You look, you lose.

20. If a vehicle is passing you, you should speed up just enough to mess with his head, and then play “Jump Around” by House of Pain and bob your head in sync.

Posted in All in the family, America the Beautiful, School Days | Tagged driver's ed, teen drivers | Leave a response