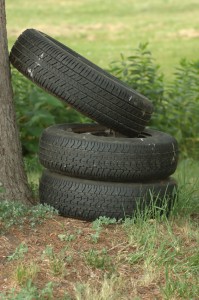 This is a story about a boy and a car and two bald tires, one with a hole in it.

The boy knew he shouldn’t do that to his tires, but he did it anyway, because he was young and he had a new (used) car and he was the first among his friends to get his driver’s license.

Look at what my car can do! he seemed to say as he peeled out, leaving parts of his tires on the road behind him. Look!

Those tires had been new, gleaming almost, when his mother negotiated them into the deal with the used car dealer that cold spring night shortly after his 17th birthday. She’d even Googled them from her phone in the car, so she knew how much they were worth. And she wasn’t paying for them, no way. They were part of the deal for his new (used) car.

Mostly, the boy drove his car to school, to work, and to his friends’ houses. But sometimes… Look! Sometimes.

Naturally, the front tires wore out fast — in just four months. The brake pads, too. And then there was the pothole that killed the front right tire, stabbing a hole into it and putting it out of its misery as the boy drove home from work one afternoon. Suddenly, he couldn’t drive his beloved new (used) car anymore.

His mother helped him change the tire, and he drove his car — slowly — to the discount tire store, his hazard lights flashing as if to say, Don’t look. Just drive around me.

The young man behind the counter at the tire shop understood the desire to do dumb things with your car when you’re young.

“At least he admits it,” he told the boy’s mother.

The young man told tales of other kids doing the very same thing and worse to their own cars. Then he warned the boy that he would ruin his transmission, which would cost $4,000 to replace.

“I’m not paying for that either,” added the mother.

The bill for the tires, alignment, brake pads, and oil change was about $500, which is roughly 60 hours of work at the boy’s minimum wage job, or 15 shifts. Actually, it’s more, because without the gas that the job pays for, his new (used) car won’t get him to work.

The mother’s not stupid. She knew that nagging and taking away the car now and then to prove her point about responsibility and safety wouldn’t keep him from killing his car’s tires. She needed him to have the car to get the boy and his brother places while she worked, and taking it away was an unnecessary burden on her.

So she waited until the boy killed the tires of his beloved new (used) car, and she let the sticker shock do the work for her.

“At this rate, it’ll cost you $1500 a year just to keep tires on your car,” she said as she drove him away from the tire shop, leaving his car behind.

Look, boy. Some lessons, you just have to see for yourself.

2 responses to “Parenting with Expensive Lessons, Not Excessive Nagging”