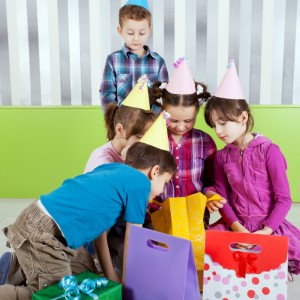 Beware: Mothers on the West Coast are ruining it for the rest of us.

Used to be, when your kids went to birthday parties, you brought along a gift for the birthday boy or girl. In exchange, your kid would get pizza, a big, sloppy, sugary piece of cake, a chance to play with friends (or more recently, pet a boa constrictor and jump on a bouncy castle while being dazzled by a magician with live doves), and a goody bag filled with candy and cheap plastic crap from China. Maybe a kazoo.

But now this agreement among parents for the social contract of the child’s birthday party has been altered, and it is a disturbing development. I heard from a mom on the left coast that this gift-for-goody-bag pact is no longer how it works. No, now you are required to bring a gift for the birthday girl or boy and for some other kid at the party. Then that extra gift is placed on a table with all the other gifts from everyone else, where the kids at the party — kids who, odds are, most likely not celebrating their own birthdays — get to take one, grab bag style.

Though I have not personally witnessed this particular brand of parental heresy, I have endured enough children’s birthday parties to predict how such an event ends up:

Or everybody gets the same Dora the Explorer backpack with matching lunchbox. It doesn’t matter. What matters is that we are now teaching kids that they deserve swag simply for showing up. Which helps pinpoint Mom Zero in this frightening outbreak: She’s a blogger. She’s used to being showered in cool free stuff, and she wants little Jacob or Isabella in on it.

And because she’s a blogger, she has influence, particularly in social media. So her plot to ruin children’s birthday parties has spread beyond her circle of friends and up the coast, and it’s probably heading in your direction soon. Like hurricane season off the Jersey coast, you can feel it.

Run for your lives! The swag is coming.