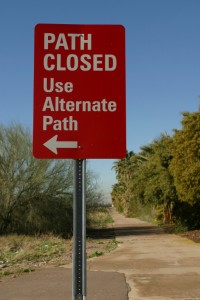 When I heard that a kid I used to coach had injured his knee during soccer practice and might be out for the fall season, I thought, “How exciting!”

Which is a strange response, I know.

Perhaps I should have felt horrible that he’d be missing a soccer season smack in the middle of high school, when colleges are starting to scout him. And I did feel bad about that indeed.

And I feel bad that his teammates won’t have his creative shots and his heartfelt teamwork this coming season.

But still, I find it exciting, because if there’s one thing I’ve learned over the past seven years of major life detours, it’s that the best stuff often comes from the worst things that happen to you. The character-building. The strength-boosting. The confidence-growing. They all come from lessons learned inside the detours.

Now, to be clear, I’m not wishing the detours on anyone, and I definitely don’t wish to relive mine. As much as I learned and grew in the past few years, cancer can kiss my ass as far as I’m concerned. I didn’t need it, and my kids surely didn’t need to nearly lose their mother to it.

It built character. It boosted strength. It grew confidence. It led to changes, major and minor, that I’d never have had the guts to go through if I hadn’t had the wake-up call of a near-death experience. I wouldn’t be so quick to stand up for myself, or to pursue the work I love, or to fight so hard to retire the hyper-vigilant worrier inside me that hurt more than it helped. I wouldn’t force myself to let go of emotionally over-invested parenting, and I wouldn’t stop every day to take pictures of the beautiful things I pass on my way to everywhere else.

I have no idea what my former player will learn during his soccer-less soccer season, but I hope it’s something that builds character, boosts strength, and grows confidence. I hope it opens his eyes to something he might not have seen from the soccer field, and I hope that whatever it brings, it carries him forward for the rest of his life. Because the blessings are in the detours, even when all you can see ahead is that something is in your way.