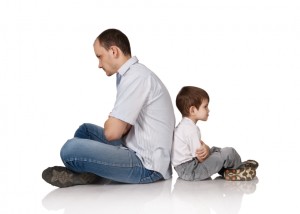 A dad of a seven-year-old told me last weekend how his son turns to Mom for quality control over much of what he does as a dad. He said he was about to administer drops in his son’s ears, but the kid was having none of it, because he was concerned that Dear Old Dad was mistaking his eye drops for his ear drops. So he summoned Mom to double-check it for him.

That’s the kid equivalent of asking for the manager.

Turns out, Dad was right, but it seems that only Mom would be believed. Frustrated, the dad asked, “Why do kids always ask for Mom?”

A grandmother chimed in, “Because they want Mom first. It’s always been that way.”

Perhaps that’s what GM’s CEO Mary Barra had in mind when she mentioned in an interview that her kids would hold her accountable for one job — being a mom.

But when Matt Lauer then asked her on Today, “Can you be a good mom and be a CEO?” he got a public dress-down from fellow journalists and pundits, mostly female.

Indeed, on Fox News’ Media Buzz, Lola Ogunnaike, anchor on “Arise,” said, “There have been male CEOs at GM for decades upon decades, and I doubt many of them have been asked how they juggle fatherhood and being a CEO.”

Then the show’s host Howard Kurtz added that when there are two working parents, it’s usually the mom who leaves work to care for a sick child.

To which Ogunnaike and Joe Concha of Mediaite.com both bristled, saying that things have changed. Concha tried to support his thesis by adding, “I try to contribute as much as I can with my daughter.”

There. That’s the reason kids ask for mom first.

It’s the reason male CEOs are never asked if they can be good dads and good good CEOs.

It’s the reason Matt Lauer asked the question in the first place.

I imagined myself in Ogunnaike’s chair (probably introduced as “Mommy Blogger,” as Fox News likes to do to me when I’m on their couch), saying, “I try to contribute as much as I can with my sons.”

If I said that, I’d be chased across the Internet by angry trolls, questioning whether I’m capable of being a good mom. But when (“Daddy Blogger?”) Concha said it? Nobody flinched, and the topic changed to the World Cup.

Even in 2014, mothers are all too often the primary caregivers, no matter which parent is working. Dads defer to moms, and kids prefer moms to dads. And as long as fathers continue to act as though parenthood is something to contribute to when they can, it will stay that way.