Parents: Leave the Lemonade Stands to the Kids 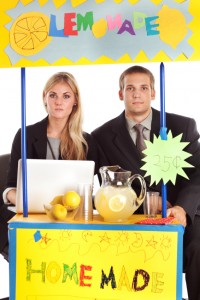 “Whoa! Look at that lemonade stand,” I told my 17-year-old son as we drove through our neighborhood.

This was no folding table and chairs. This was an actual stand, fashioned from shutters and painted lemonade pink and yellow. It looked like it belonged in a Parents magazine spread. Given how close we live to New York City, it really could be a prop from a Parents spread. Or a Broadway show. Or Gwyneth Paltrow’s apartment. It was that spectacular.

My teenager, however, was unimpressed.

“I think it’s better when the parents stay out of it,” he declared. “Like you did.”

I paused and held my breath, the way you do those rare times your teen pays you a compliment, as if you moved too quickly, it would fly away.

“We were the last generation of kids to do things on our own,” he continued, adding that though he and his friends had video games, they still played outside, something he’d mentioned before. But this time, he had more to say.

“We had a card table and a sign I made out of poster board,” he recalled.

“And a vuvuzela heralding passers-by, which is mainly why I avoided the whole scene,” I chuckled.

“No, but you bought the lemonade stuff, but you didn’t help us sell it,” he remembered. “Younger kids, their parents do it all.”

I remembered the lemonade stand I’d seen the day before, with a posse of kids and just as many parents, holding up jumbo signs that looked like they’d been printed and laminated at Staples, bearing the über-hip saying, “Keep Calm and Drink Lemonade.” There wasn’t a vuvuzela among them.*

But the lemonade stands that my kids and their friends ran were made and managed by children. They set the prices, mixed the lemonade, flagged down customers, served them, made change, and “cleaned up” afterwards.

Of course, I checked in on them, and when my neighbor’s four-year-old joined them, I sat with him in a chair to keep him out of traffic. But the rest? That was up to them. (Including keeping all the money. There was no budget for supplies. Hmmm.)

The thing is I know how younger kids’ parents got there, how they decided to help their kids sell lemonade:

Hence, so many parents micro-managing their kids’ lemonade stands.

My son seemed to feel that younger kids are missing out on a childhood rite-of-passage. I’d like to add: So are the parents.

This is a chance to let your kids go just a little bit, to teach them something about sales, money management, and getting along with people you work with for the good of the business. And it’s a chance for you to stay inside, away from that damn vuvuzela.

CORRECTION 6/4/14): *Turns out, that was actually a fundraiser for my local Mother’s Group, prompting this apology.

Posted in All in the family, Days Like This, Home Sweet Home | Tagged lemonade stands | 6 Responses

6 responses to “Parents: Leave the Lemonade Stands to the Kids”