Words for the Female in Public 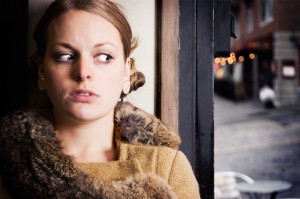 My friend Hilary and I had just left the party when we heard someone shout the “c-word.” We looked over our shoulders to discover a guy about our age trailing us down the sidewalks of Allston, Massachusetts, about two miles from our dorm at Boston University. And he had some words for us.

Among them were that c-word, plus the b-word, something about our breasts, and a gesture involving his tongue and his hands — and I could only imagine where’d they’d been.

Hilary and I pulled closer to each other and debated whether we should hop into a taxi once we got to Commonwealth Avenue, even though we were both very capable of making the walk home. It was late; the “T,” Boston’s subway system, was closed for the night.

We kept walking toward Comm. Ave., and this guy kept following us, informing us about our private parts. He looked like a college kid, like us. But he also appeared to be very angry that she and I were walking on the sidewalk, as though we didn’t belong there, but his cussing, bullying, aggressive self did.

As his verbal onslaught amped up, we calculated whether we could take him if he assaulted us, Hilary a 5′ 10″ member of the crew team and me, a 5′ 8″ soccer player, assuming he wasn’t armed.

We crossed the street.

He crossed the street.

We contemplated dipping into a convenience store, but we sensed that wouldn’t have stopped him. It might actually have made him more angry and belligerent, making us feel cornered by the Doritos.

So we walked faster toward Comm. Ave., where we dashed across the street, over the T tracks, and hailed a cab before our stalker could reach us. We rode the 1.5 miles to our dorm, paid the cabbie, and thought twice about attending Allston parties for our remaining three-and-half years in college.

This, because we were women, young women, walking somewhere that a man decided we didn’t belong. It wasn’t the first time I’d been harassed for being FIP — Female in Public — and it wouldn’t be the last.

So it’s no wonder to me that the male-on-female bullying has now extended to the Internet. It’s been chronicled by Katie Heaney at New York Magazine and Amanda Hess at Pacific Standard. It’s been shared in the oodles of comments and Facebook posts online. (They’re buried under the sexual threats and put-downs.) And it’s the subject of enlightened tweets by understanding men and women, as shown on Upworthy.

It’s one thing to shout at women on the street. It’s another (anonymous and home-based and therefore far easier) thing to do it online. So of course it’s happening on the Internet. Of course.

When you write and appear on TV for a living, you put yourself out on that virtual sidewalk, where a few (usually men) sometimes have some words to say about that. Sometimes, the c-word, which this winter was a different one — cancer, which my commenter wished I’d die of. As I said in February, Kudos, Internet Bully. That One Hurt.

As women, we can avoid the sidewalk or ignore the vitriol. Or we can all — every blogger, writer, editor, commenter, man, woman, teenager — shut it down as soon as it starts. Because if a group of men had seen what was happening to Hilary and me that night in Allston, no doubt they would have surrounded us, protected us, and perhaps even shut our bully down. And yet, online?

Why is it when bullying and harassment happen in comments sections, it’s considered “free speech,” but on the streets, it’s a crime? Isn’t it time we changed that?

Commenters: Call it out.

Because the sidewalk belongs to all of us.

Editor’s note: MommaSaid is my house, and just like in my house, I kick out strangers who don’t behave. Be thoughtful in your comments below or it’ll be deleted.

Posted in Boys will be boys, Days Like This | Tagged blogging, online bullies | 1 Response

One response to “Words for the Female in Public”