Lugging My Baggage Here, There, and Back Home 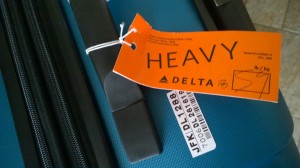 It got heavier and heavier throughout the trip.

The person who missed me the most while I was away was my cat.

That’s not to say that my two teenagers didn’t miss me while I traveled across the country to Seattle, then down to Atlanta, and back home again to New Jersey. It’s just that, unlike the cat, they haven’t been following me around the house since I got home yesterday. Because that would be disconcerting.

The kids understood I’d be back and that I wouldn’t suddenly leave again upon my return, but Benny doesn’t know that. He just knows that I was gone a heck of a long time, and that there’s no guarantee I won’t turn around and do that again real soon.

Which is what it must have been like for my kids when I was sick. The last time I was apart from them this long I was in the hospital, slaying cancer and sucking back tears when they called each night to play the piano for me. I was here, then I was gone again, then here, then gone again. And when I was here, I wasn’t the usual, active, involved mom they knew. I was sick mom. Bald mom. Not mom, so much as the lady lying on the couch, dozing in and out during back-to-back episodes of  “What Not to Wear” on the TV.

Though it’s been almost seven years since I was diagnosed with non-Hodgkin’s lymphoma, we all still carry that baggage with us, in us. And it’s heavy. We carry it to school and to work, but it gets heavier when we’re apart for longer periods of time, because it reminds something deep inside us that Mom was almost gone for good. Despite the crazy-busy schedule I kept on the road and in the air last week, something in me felt heavy. And much like my big ole suitcase, it got heavier with each stop.

This, I believe, is the point of travel, whether it’s for vacation, work, or in my case last week, “work-cation.” Whether I was seeing the sites of Seattle with Microsoft early in the week, giving a speech before Mom 2.0 in Atlanta later in the week, or visiting an old college buddy at the end, I was away from the usual, the safe, and the known. And I was away from my kids, and my cat, who is currently “helping” me type this.

I could spend this space giving you the rundown of my travels, but to me, what happened outside wasn’t as important as what happened within: I sat with that heaviness and didn’t try to unpack any of it. I let it know I heard it, and I validated it, reminding it (and me) that it’s no wonder it’s there. After all, we’ve been through a lot in the past few years. No wonder there’s something heavy inside.

And then, instead of getting heavier, it got a little lighter, as though being recognized was enough for it to let go a little. This, I’ve learned to do during a two-year course to become a Certified Focusing Trainer, and it’s what I’ve started teaching others to do. Because if we all learn to sit with and hear our baggage, no matter how heavy it is, it gets lighter. Imagine if we could all hear it together. Join me on this trip at ClearlyNow.net, coming soon. Benny is already there, waiting.

If you want to check out the reports from my giant triangle of travel, check out #ChampionsSummit (Seattle) and #Mom2Summit (Atlanta) on Twitter, or just scroll through my feed @JenSinger (now, under Benny).