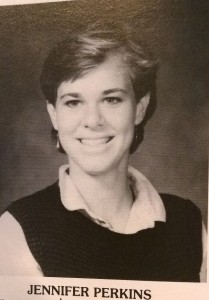 It’s one thing to drive through your hometown while music from your high school years plays on the radio. It’s another when your teenager is the one driving.

So when The Pretenders’ “Back on the Chain Gang” started playing on my son’s car radio Saturday night as we drove on Route 17 in Ramsey, New Jersey, I had…let’s call it “a moment.”

I remembered driving down that very stretch of highway in my first car, a month after getting my license, just like my son now. I remembered stopping at Tiffany’s Diner for French fries and gravy. And I remembered pulling the car over at an empty school one Saturday night so my friend Diane and I could dance to The Pretenders outside the car. (Think Molly Ringwald in “The Breakfast Club,” and you’ll picture the moves we had.)

But I don’t remember thinking, “Those were the days.” I wouldn’t want to go back to the high school years, and I’d bet that when my son gets older, he won’t want to go back either. I mean, they’re fun and all, but they’re also awkward and soul-sucking, no matter what generation you’re in. (See above: “The Breakfast Club.”)

The thing is, I knew that back then. For my class’ graduation party, I put together a slide show (and I mean actual slides on a projector) of photos I’d taken of my classmates as their yearbook photographer and class president. I set it to Bruce Springsteen’s “Glory Days,” and I played it several times over the night for various classmates.

A few hours into the party, held in the high school gym, I went into the classroom where the projector was to run another show, only to find that someone (or several someones) had pulled my slides out of the projector and stole a bunch of them. All the work I’d done, all the planning for my classmates, and some jackwagons ruined it all. (If you’re reading this now, know that if you’d just asked, I would have given you actual prints. Good luck looking at your slides now, dumbasses!)

I sat in a chair and cried, and then one of the chaperones discovered me. I told him what had happened, and he tried to cheer me up.

“I haven’t seen a president cry since Nixon,” he said. Then he told me I’d picked the perfect song for my show, because for many kids, high school truly is their glory days.

But teenagers can be a bit self-centered and at times mischievous. Their brains aren’t even fully formed until they hit their twenties, so they just don’t think like adults. And sometimes they take apart people’s slide shows, steal what they want, and leave the rest all over the desk and on the floor.

Where’s the glory in that?

So when I listened to The Pretenders Saturday night singing, “Those were the happiest days of my life,” as I drove through my hometown, I had to disagree. Much better things were ahead, and still are, for me and for my son. There are many glory days and years, and they come and go, but they do come back. They don’t peak at 18 and disappear for good, and they don’t take your slides with them.

I’ve had many glory days since I danced to The Pretenders outside my first car, and I’ll have many more. We all will. You just have to make them happen and know that they’re never over for good.

6 responses to “Glory Days Well They’ll Pass You By”