Is Life a Track Meet or a Soccer Game? 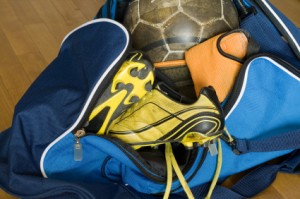 The boy from another team was done. And it hurt to watch.

He’d rounded the end of the track for the tail end of the high school race on Saturday, when PLUNK! He dropped his baton. He ran back to get it, but by the time he got back onto the track, he was so far behind everyone, he just dropped his head and walked across the inner field inspecting the baton so he wouldn’t have to look up at anyone. A girl from his team appeared at his side, and comforted him all the way back to the finish line.

I wanted to shout encouragement, but as a soccer coach, I don’t have anything that fit the situation:

That’s when I realized how harsh a track meet can be. Sure, they lie around in the sun a lot, waiting for their chance to run, but that run has a very small window — if you screw up, you’re done.

In soccer, you can be outplayed and out-finessed for 89 minutes and then score a fluke goal and win the game in the final minute. Or vice versa. You can make errors, pass the ball to the other team, and even knock it into your own goal, and still have the rest of the game to make up for it. Or, you can beat a team twice during the regular season, and then get crushed in an agonizing final game against that very team, leaving you to count the minutes until it’s blessedly over. (Ahem, yesterday. I’m still not over it.)

But in track, you have 100 yards or one mile or so to run very, very fast. And then it’s over and you go lie in the sun for another hour or two. While you’re on the track, though, you’d better not make mistakes, or else you could wind up dropping your baton, and then wading through the other runners sunning themselves on the field.

All of which begs the questions: Which one is more like life, a track meet or a soccer game? Which one is preparing my soccer-playing, track runner more for life after school? Let’s see:

TRACK: Life is a solitary event in which you need to dig deep and make the most of it. If you’re lucky, people will be in the event with you, or at least running along side you, cheering you on.

SOCCER: Life is a team sport in which you need to work with others for a common goal. If you’re lucky, you’ll be on a tight-knit team that respects and appreciates your skills. If it wins, all the better.

Though I don’t understand the appeal of track  — why run if there’s no ball? — I respect its life lessons. And soccer’s, too. Because life is all that, a solitary event and a team sport. Sometimes you drop your baton, and sometimes you get crushed. But you get back up and keep playing, for the love of the sport.