And We Turned Out Fine

As I mentioned yesterday, my sites were crashed by a flood of soap opera fans who rushed over to my site ParentingWithCancer.com. Posts and Facebook likes disappeared, so now I’m reposting some of the faves. And this one sure was: 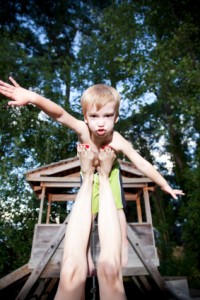 The latest in this vein is the video below, aimed squarely at my generation born in the 60s, 70, and 80s. (Except the black and white parts. The world was in color by the time Generation X arrived.) It’s a classic “And We Turned Out Fine,” steeped in nostalgia and voiced over with sarcasm. Yet I feel the need to point out what the video missed:

We suffered concussions, and parents, teachers, and coaches told us to “shake it off,” because back then, children had magical powers to offset traumatic brain injuries.

Nobody watched us while we went off playing, except that creepy guy who lived next to the park who always tried to lure us into his house with candy. But there was nothing we could do about him. I mean, it’s not like he ever hurt any children, right, or else the neighborhood would have been warned with some sort of pedophile list. Oh, wait…

Empathy for hurt feelings meant hugs until age 6 or 7, and then “suck it up” or “be a man” after that. Because nobody likes a crybaby.

Anyone with a Spanish accent was “Puerto Rican” no matter where they were born, African Americans were “from the ghetto,” and homosexuality was Billy Crystal on “Soap.” (When his character came out, his brother said. “We’re brothers, and I’m not gay. And if I’m not gay, you’re not gay.” See? Logical.)

You had to watch a TV show the moment it aired or you’d never see it. Well, you could see it in the summer, because there was nothing but re-runs on TV for three months.

As the video said, “Little League had tryouts, and not everybody made the team.” Especially girls, until Title IX changed that. I was the only girl on my team, which made one father so angry, he heckled me. No one stopped him, because there were no Sportsmanship Pledges back then. Just a grown man yelling at a little girl, because she was better at first base than his son was. Instead of dealing with him, my coach told me to “suck it up.”

Bullies were just “boys being boys.” Mean girls were just “popular,” and maybe if you’d stop playing ball with the boys at recess and act like a girl, they’d be nicer to you.

The only thing keeping us from being jettisoned through the windshield when our mothers slammed on the brakes of their station wagons  was Mom’s right arm.

When we were done with our Happy Meals and glass Coke bottles, we threw the garbage out the windows of our cars. Seriously.

According to television commercials, a “complete breakfast” included orange juice, white toast with a pat of melting butter, and a bowl of colorfully dyed cereal so bad for you, it often had “Sugar” in its title.

If you fell sick while at school, you had to lie around the nurse’s office for hours because there was no way to reach your mom. And it was always your mom, not your dad.

People drank “one for the road,” and then sped down the highway toward your mom’s station wagon. (See above: jettison through windshield.)

We paid for music — and we had to buy a dozen songs at once — only to have the cassette player chew up the tape. So we taped (literally) the songs off the radio, trying to time the recording to stop before the DJ talked.

But you go ahead and get all nostalgic for this version of when we grew up. Because you know, we turned out fine.

Posted in All in the family, America the Beautiful | Tagged raising kids, retro parenting | Leave a response