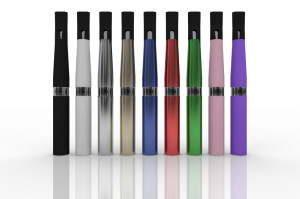 The e-cigarette industry is one step ahead of the Feds, who have yet to regulate the liquid form of the neurotoxin nicotine. If you’re an adult who likes to “vape” e-cigarettes, which deliver liquid nicotine, go ahead and enjoy. But first, lock up your liquid nicotine before it poisons or even kills your kids.

The New York Times reported yesterday that nicotine is currently being sold in a potent liquid form by the vial, the gallon, and even the barrel to fill the quickly growing demand for e-cigarettes, the electronic nicotine (and yes, sometimes nicotine-free) delivery devices.

But the potential dangers of liquid nicotine are alarming public health officials, as there’s been a surge in nicotine poisonings. According to the Times:

Nationwide, the number of [poisoning] cases linked to [nicotine] e-liquids jumped to 1,351 in 2013, a 300 percent increase from 2012, and the number is on pace to double this year, according to information from the National Poison Data System.

Currently, e-cigs are being touted by proponents as a safe alternative to tobacco for adult smokers. Nicotine is also compared to caffeine in terms of safety as a stimulant. Except for this: if you spill your latte on your arm, you won’t wind up in the hospital with caffeine poisoning. Liquid nicotine, on the other hand, is toxic. As the Times reported:

In Kentucky, where about 40 percent of [nicotine poisoning] cases involved adults, one woman was admitted to the hospital with cardiac problems after her e-cigarette broke in her bed, spilling the e-liquid, which was then absorbed through her skin.

Unlike nicotine products for quitting smoking, such as gum and patches, liquid nicotine remains unregulated by the Food and Drug Administration. That means that people can go out and buy enough liquid nicotine to kill them and the whole family. And if they are unaware of its toxic effects, they might leave it around the house where anybody could touch it, drink it, spill it, and therefore, be harmed by it. Perhaps even killed by it.

So if you’re into e-vaping and you’re an adult, go ahead and enjoy. But please, lock up any liquid nicotine you have. Why?

Most [liquid nicotines] range between 1.8 percent and 2.4 percent, concentrations that can cause sickness, but rarely death, in children. But higher concentrations, like 10 percent or even 7.2 percent, are widely available on the Internet. A lethal dose at such levels would take ‘less than a tablespoon,’ according to Dr. Cantrell, from the poison control system in California. ‘Not just a kid. One tablespoon could kill an adult,’ he said.

If you suspect your teen is vaping, read “Is Your Teen ‘Vaping’ E-Cigarettes?”