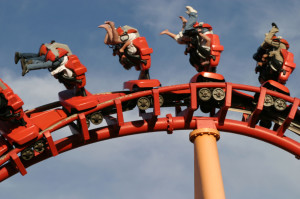 Some days, I can’t look at my Facebook wall. I just can’t take the mood swings. Turns out, that’s Facebook’s fault.

The BBC reported this morning on a new study that found that moods can spread virally through social media, such as Facebook.

The study set out to find support for “detecting emotional contagion” in social networks. Using colorful charts and mind-boggling algebra which hurt my feelings, the study found a direct effect of rain to negative posts. In other words, someone whines on Facebook about the rain in New York City, and her friends in Atlanta, where it isn’t raining, tend to post more negative things — 1.29 more negative posts than normal.

It works for happy posts, too, even more so. When someone posts an upbeat statement, an extra 1.75 positive posts were generated, probably with excessive use of exclamation points!!!!

This, the researchers posited, could mean that social media can effect mood globally, perhaps ultimately having an impact on political issues and financial markets.

If I could do the algebra, I’d posit that those of us who tend to be emotionally wired are affected by social media moods exponentially. Take this morning’s emotional roller coaster ride on my Facebook feed:

A complaint of a rough night due to illness made all better by a cuddly cute kid comment and two cartoon hearts.

An author announcing a reading 3,000 miles from here that I wish was here. (Or I was there.)

A confession about a fear of money.

A touching photo and link to something titled, “This Woman Has Cancer. What Her Friends Did When They Found Out Touched My Heart and Made me Cry.” Which was enough to make this cancer survivor cry.

Pictures of someone’s Cancun vacation, with my accompanying grumbling (even though I went there last spring break.)

“What your coffee order says about you” link. (It says I like coffee and I’m in a hurry. Duh.)

Happy anniversary!!!!! I married my best friend XX years ago and we’re still in love!!! (Yay, you.)

More weather complaints, specifically about a wind chill of 9, despite hitting 65 the day before.

An assertion that we “choose happiness” despite external conditions, including Facebook feeds, which, we now know, is not true at all.

I’m going to stay off Facebook this morning. I can’t take the mood swings.

No responses to “Does Facebook Make Your Mood Swing?”