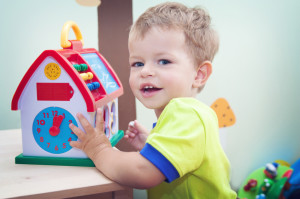 I used to spend my extra hour of “Fall Back” explaining to my toddler why 4 a.m. is an inhumane hour to wake up your mother. But he didn’t care. He just wanted to play “vroom, vroom car” yet again. But 4 a.m. is no time to play “vroom, vroom car” or any other game, unless you’re in college and you’re at the tail end of a beer pong marathon. To wake up well before dawn to repeatedly push plastic cars across the kitchen’s linoleum floor is, frankly, unappealing if you’re over the age of four. No, it’s downright insulting, especially when it lasts for a week until said toddler adjusts to the time change and starts to wake up at the slightly less obscene 5 a.m. for more “vroom, vroom car.”

So while the rest of the world cooed about their extra hour spent reading the newspaper or (screw them) sleeping in, I fantasized about Spring Ahead. I (day)dreamed about losing an hour, about a little less time with my very little and not-good-at-sleeping kids. Which is blasphemy in parenting circles and outside of those circles, where trolls label parents who utter any complaint as “selfish breeders” who shouldn’t whine about the situation they willingly put themselves in. No matter how freaking tired they are.

And I was tired. When my neighbor who owned a sleep study facility sent out letters about a block party in envelopes from his work, I got excited. I held my breath as I opened the envelope, thinking, “They want me for a sleep study!” But no. It was about a block party. And yet, I held each of the three envelopes that would soon arrive as though they were certified letters from the Prize Patrol. I was that tired.

And that’s my own fault.

That’s right, anti-parent trolls. Don’t put your fingers on your keyboard just yet. I wrote, “And that’s my own fault.”

It was my own fault for not asking for more help and more sleep when my kids were very little and not good at sleeping. As a full-time stay-at-home mom, I thought it was my duty to take the sleep hit, and I wore it like a badge of honor.

Look how dedicated I am to my small children! Look how hard I work at taking care of them! Look how zzzzzz. Oh, sorry. What time is it?

So I said “yes” whenever my mother-in-law offered to take the kids for the weekend, and I looked forward to Spring Ahead, like it was a government-issued right of a wrong. But it would be a few years before I accrued enough sleep to feel less exhausted, and by then, “vroom, vroom car” at 4 a.m. had been replaced by kids old enough not to wake Mom up so god-awfully early. And Spring Ahead went from reparations for Mom back to a lost hour from a busy weekend. Fall Back, meanwhile, meant sleeping in again — the whole house.

My secret relief is no longer. Now that my kids are teens, Spring Ahead means grumbling — by my kids — for a few mornings, and the joy of having it lighter later as we head toward the official start of Spring. No worries, though. We’ll get that hour back this Fall.

Posted in All in the family, Home Sweet Home, Momma Said | Tagged raising toddlers, spring ahead, toddlers | Leave a response