Kudos, Internet Bully. That One Hurt. 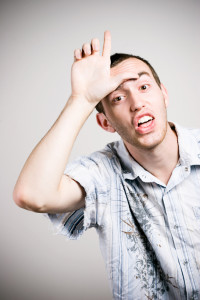 I was walking across the school yard when a boy from my brother’s class — an eighth grader to my fifth — shouted at me, “Hey Perkins! Didja get your period yet?”

If I could have added four years and the hardening of high school that comes with it, I’ve had given him the finger. Not the double-gun kind that’s accompanied by a facial expression that says, “Come closer, and I’ll kick you in the balls.”

No, that particular piece of mean deserved a quick flip of the bird with otherwise indifferent body language, followed by pretending that the whole thing had never happened.

But I was 11 and he was 14, and this was a small, sheltered, suburban K-8 school where bullying wasn’t commonplace. Because when everybody knows everybody, it generally cuts down on the meanness.

What he shouted at me embarrassed and hurt me. It felt like somebody had run up to me and punched me in the heart. I looked away, swallowed tears, and jogged off to go play kickball with my friends.

Yesterday, someone yelled across the school yard at me again, only this time, it wasn’t at my small school where everybody knows your name. It was on a national news web site where they’d posted a segment featuring me talking about “shopping cart inflation.”

I’d dropped by to get the link for someone who had asked for it, and I made the mistake of “walking across the school yard” by reading a few of the comments at the top. Among the dissertations about the government, oil prices, and my nice-looking kitchen, one person offered this insight: “Die of cancer Jen Singer.”

I am not sure why my pointing out that the price of ground beef has increased at a rate much higher than inflation would spurn such hatred toward me, but I am not an expert in sociopaths. And I say “sociopath” and not “bully,” like my menstruationally curious classmate, because I looked up “sociopathic personality disorder” and I found this:

Sociopaths are often unable to control their behavior and their expressions of annoyance, irritability and threats when faced with situations not appealing to them, and they often tend to resort to threats, aggression and verbal abuse.

Knowing this, I should just give him/her the finger and walk away, except for this: Seven years ago, I did, in fact, nearly die of cancer. When I was safely in remission, I asked my oncologist how close I had come to death. He held up his fingers in what I’d hoped was a peace sign and said, “Two months.”

Touché, news web site troll. I don’t know if you went through the effort of Googling my cancer or if you just got lucky, but you have scored the sociopathic hat trick: threat, aggression, and verbal abuse.

And it hurt, like someone had run up to me and punched me in the heart. Contrary to popular advice, I am not going to “ignore it and move on.” Instead, I’m going to take this opportunity to acknowledge that it hurt, that it was mean, that it was a low blow.

Because acknowledging what it felt like to be singled out in such a vile way isn’t giving the anonymous commenter power. It’s giving me power. Swallowing the pain and going about my business doesn’t release it. In fact, that kind of routine emotional stuffing can lead to illness. Perhaps even cancer.

When I posted about this on Facebook last night, I had a few dozen friends come to my rescue, defending me against said troll, promising karmic retribution, and providing virtual hugs.

It was the Internet version of being surrounded by friends on the school yard, and all of us, simultaneously, giving that loud-mouthed jackass the finger — the double-gun kind.

It probably won’t stop anonymous commenters from sharing their expressions of annoyance and threats, but that isn’t necessarily my goal. Rather, I am simply saying that my feelings were hurt, and that’s not okay. Thanks, dear friends, for the virtual hugs. I will do the same for you if you ever need it.

Update: The offending comment was removed from the site. Justice is served, and Crazy Town has moved.

One response to “Kudos, Internet Bully. That One Hurt.”