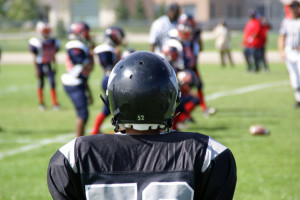 Contrary to Twitter belief, Seattle Seahawks’ Richard Sherman’s post-game interview (read: rant) had nothing to do with race or class. He’s hardly the first professional athlete to combine an overdeveloped sense of self with a big mouth. (Google “John McEnroe” and “Superbrat.”)

It also had nothing to do with age, because while his coach has referred to him as “an incredible kid,” he is, in fact almost 26 years-old. Nor does it have to do with inexperience: He’s been in the NFL for three years, after a successful football career at Stanford. The man has had a microphone in his face many times before.

And it surely isn’t about what CNN called “intensity, focus, and a competitive nature,” which is all an excuse for the ensuing trash-talking. All professional sports players are intense, focused and competitive, or they wouldn’t be there.

In youth soccer, I’ve coached hot-headed males before. On the field, they are a liability. I’ve pulled them out of games before they could get a second yellow card or a red card, which would affect the whole team, not just them, as we’d have to play a man down the rest of the game.

Off the field, they are an embarrassment to the entire team. They’re the ones I stand behind in the post-game line to make sure they don’t spit on their hand before “congratulating” the other team. They’re the ones that I warn, “Nothing but ‘good game’,” which is a coach’s way of saying, “Shut your trap and go home.”

The trash-talking, pushing, dirty plays must all get left on the field. When the game is over — and especially if you’re on the winning team — you let it go and look forward to the next game. It’s what we coaches teach kids as young as 6.

But the angry ones are not team players, which is a shame, because they’re playing team sports, a fact that seems lost on Richard Sherman. In his pre-Super Bowl “apology” tour, he has said he is most sorry for the response the fans made to his bravado. And while it is a horrible shame that a few yahoos made a racial issue out of the situation — and on Martin Luther King Day no less — playing the victim card doesn’t change the fact that Sherman’s behavior Sunday was unsportsmanlike.

In short, Sherman acted like a Superbrat. And Superbrats come in many colors, shapes, genders, and sizes. It’s just that this one’s going to the Super Bowl.

2 responses to “Sherman: Confessions of (Yet Another) Superbrat”