11 Things That Happened Since MommaSaid Was Born 11 Years Ago 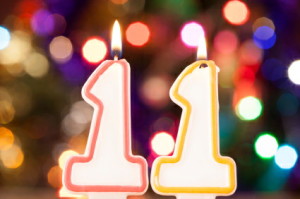 They grow up so fast.

To celebrate 11 years online, I thought I’d give you some perspective of the prehistoric Internet era in which she was born. I present to you a timeline of 11 techie things we now take for granted in the order in which they were launched — all of them after MommaSaid:

January 20, 2003: MommaSaid.net is born before anybody had put the words “mom” and “blog” together.

2004: Facebook launched, but was used mostly by kids at Harvard. Ten years later, those kids at Harvard and in schools worldwide will ditch it for the yet-to-be-invented Instagram and Snapchat.

2005: YouTube launched. Cats everywhere get ready for their 15 minutes of fame.

2006: Twitter is launched. Bloggers wonder why they’ve bothered with 500-word thoughtful posts when they could just hashtag their way through 140 characters and b dun w/it!!! #RIPGrammar

2007: Apple debuts the iPhone. Chiropractors gear up for the increase in neck strain.

2009: Quora launches. For the next five years, whenever someone follows me there, I will apologize. I just don’t know what it is.

2010: Instagram launches, blowing the lid open on what everyone else is eating for lunch. #nofilter

2010: First generation iPad released and promptly declared old news as the second, third, and fourth generations come out within 2 1/2 years.