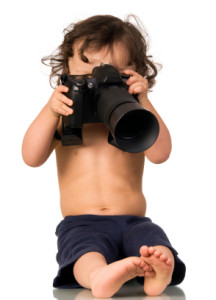 One of the biggest regrets I have as a sometimes-in-the-spotlight mom blogger/author/writer is the time a photographer followed my son into the garage to shoot him on his way to soccer practice when really, he just wanted to get the hell out of the house and away from the camera.

The article was a wonderful feature about my web site ParentingWithCancer.com for a magazine that ended up putting my big ole face– a shot that my oncologist proudly shares with patients and doctors.

They used a bunch of old photos from when I had cancer, but they wanted something fresh, something that showed that our lives had gotten back to normal after cancer.

As always, I asked my kids if they wanted to be in the shoot. (They have been in magazines and on TV, including The Today Show.) One said yes. The other said he just wanted to go to soccer practice instead.

And yet, I gave the photographer permission to follow him into the garage to get a shot of him tying his turf shoes. The photographer got the shot, which wound up in the magazine, but at what cost?

Watching the Gosselin twins’ awkward silence on the Today Show this morning, I could see the potential cost when you want to show the world you’re okay. Because these girls clearly weren’t okay with what went down on the Today Show couch.

Instead of protecting them from the burning spotlight, their mother chided them and spoke for them. Then she insisted the “continued exposure” in similar high profile interviews would not, in fact, cause injury to her 13 year-old daughters.

I’m not going to defend Kate Gosselin, and I’m not even going to defend myself. Her stakes are much higher, of course, because the Gosselins are former reality show stars and continual gossip rag fodder. As a result, their fallout is far more public and more messy than anything I’ve ever experienced. (And this Today Show appearance was an epic fail.) But when your career is tied to your story as a parent, it’s sometimes easy to do stupid things.

I hope she’ll apologize to her kids. After school today, I’m going to do that very thing.