My Kid is Not an Effing A-Hole 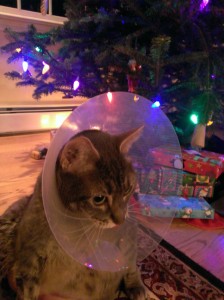 It was a rough holiday for Benny, but he’s all better now.

And neither are you, sir.

And yet there we were, just a few days before Christmas, rushing our beloved cat, Benny, to the animal hospital. He was about to have emergency surgery for a serious bladder issue — all I knew is that it involved crystals in his bladder and re-routing his urethra and the risk of death.

My 16-year-old son was sitting in the back seat of my car with Benny the whole ride there, about a half-hour or so, in holiday traffic, on the last Saturday before Christmas. He had also put his arm around me at our vet’s office, promising everything would be okay, and that he would be there for me, and I sucked back tears.

So when I pulled up to the animal hospital’s emergency entrance, he didn’t look before he opened the car door. He’s 16, and he was trying to help me, and we were both worried and scared and sad. And, like I said, he’s 16.

That’s when you tried to pull around us in a hurry, but had to stop short. You shouted at him, “Effing A-hole!” only you said the real words. At my kid. A few days before Christmas.

He let your car go around us, and then he grabbed Benny’s carrier and dashed inside while I went to park the car.

You, too, parked your car across the parking lot from me. I saw that your back window had those little family stick figure decals on it, except your family was made up primarily of cats, three or four of them, I don’t remember exactly. I made a mental note to look for you inside.

Somehow, you were seated in the waiting area before we were. I’m guessing it’s because you’d been there before, so your cat’s information was in the system already, and you didn’t have to spend as much time checking in.

As we walked by you, I made sure to wave to you and say hello twice, admittedly a bit aggressively, while my son pulled me away. When you looked up and saw him, I could tell you knew why I was being slightly obnoxious and rather protective. You’d called my son an “effing a-hole,” you see. A few days before Christmas, while we were on our way to get our cat emergency surgery.

It must have been a shock when you went to pull around my stopped car and WHEW! The door flew open. You could have hit the door. Or my son. And here you were on your way to the animal hospital with one of your cats, a few days before Christmas, and in a terrible hurry. Your mind was elsewhere, probably on your cat and what was about to happen, and how it would affect your pet and your family and your holidays. (And your wallet.)

When we left, without Benny, who had been whisked into surgery, I looked for your car in the parking lot.

“Mom,” he said, and steered me toward my car. I reminded him that I blog and I tweet and I write! I added that Mark Twain said, “Never anger a man who buys his ink by the barrel.” And we drove off while I scanned the parking lot for his car.

I didn’t see you two days later when we picked up Benny, nor on Christmas morning when he developed an infection and needed to go back. As we sat in the waiting area, I saw a couple checking out of the hospital without their pet.

“Can we get his carrier?” the man asked the nurses. I heard the nurse call someone and say too loudly, “We need the carrier for the euthanasia case.” And the man’s wife started crying.

I put my fingers through the cage door of Benny’s carrier and caressed his ear. And then I said a little prayer that he would be okay. While I was at it, I asked that your cat be okay, too, because sir, you are not an effing a-hole. And neither is my son.

Posted in All in the family, Days Like This, Momma Said | Tagged animal hospital, hollidays, pets | Leave a response