January: You Wanted it. Now, Be Nice. 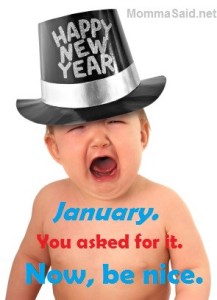 According to Mashable, the Daily Mail, and Newsy.com, today is the most depressing day of the year.

Indeed, the high schoolers who took refuge from the pouring rain in my car this morning when their schoolbus was late would concur. The weather sucked, going back to a full week of school after the holidays and snow days sucked, and Mondays in general and January in particular suck. Or so they grumbled.

Poor January. It’s December’s afterthought. It’s cold and fluey and it causes dry, itchy skin. Divorce rates go up in January, and the pretty lights we all put up last month come down. The holiday bills arrive, and the bathroom scale, well. Let’s say that gym membership enrollment rises.

But wait a minute. Isn’t this what we all wanted? I mean, what other month has a worldwide party to ring it in?

What happened to all those well wishes for a happy new year, all those resolutions, those proclamations of “This is our year!” Why be so harsh about January?

Those of us who celebrate our birthdays in the first month of the year (the 8th — me and Elvis), would like to remind everyone else that the party doesn’t have to end on December 31st. There’s plenty to celebrate in January, starting with the fact that we are all still here to celebrate anything at all.

Since the “most depressing day of the year” falls on the 6th, I present to you six reasons to be happy about January:

Posted in Days Like This, Home Sweet Home, School Days | Leave a response