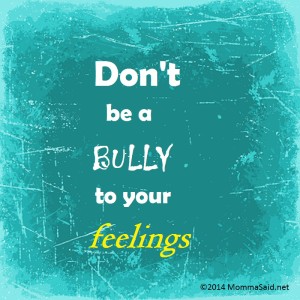 On Monday, you couldn’t get a towel at my gym. The New Year’s resolution people had taken them all. No worries. I don’t expect that to happen again until next New Year’s.

Here’s the dirty little secret why it’s so darn hard to stick to our goals: Something in you doesn’t want you to achieve them.

Well, that’s not entirely correct. It’s not deliberately sabotaging all the positive changes you’re hoping, planning, and trying to make. It just wants to be heard and acknowledged while you’re doing that, so that you can move forward.

I’m talking to you, Joel Olsteen. On New Year’s Eve, a friend of mine put this digital poster of yours on my Facebook feed: 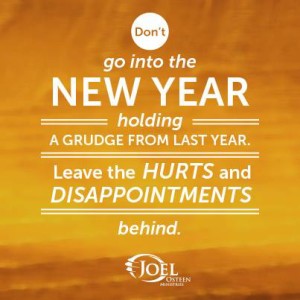 Sure, you can bully them into submission with positive affirmations, good intentions, and to-do lists. But here’s the thing: they won’t go away just because you want them to. They are there for a reason, to remind you, teach you, and help you.

Think of your hurts and disappointments like your children. They need you. They want you. They love you. Would you park them at the gate to the amusement park and say, “See ya!” You wouldn’t, because you know you have a responsibility to them.

So if you want to let go of old grudges, give your hurts and disappointments attention first. Tell them you hear them, and that you’re there for them. Acknowledge their pain and the horrible things that have happened to them. Then make space for them, and let them know you’ll be back for them.

Know that it’s not a one-time conversation, but something more like the “sex talk” you give your kids — one that happens time and again until they don’t need it anymore.

They’ll feel heard, and you’ll feel lighter, because your grudges won’t need to be carried anymore. Only then will you be able to keep that resolution.

I’ll save you a towel.

Posted in Days Like This, Focusing, Home Sweet Home | Leave a response