All That’s Left of Our Family’s “Lellow Halse” 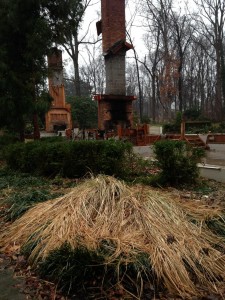 This is all that’s left of my Aunt Nancy and Uncle Peter’s house. Which, by the way, was a perfectly good house: updated, well kept, quite lovely, in fact.

It was built in 1972 next door to my grandparents and around the corner from us. It’s where we had Christmas dinners and Mother’s Day gatherings. It’s where my brother taught our cousin Susie to walk, and I taught her to read. It’s where my grandmother once reamed us out for not visiting her enough on our trips home from college, and where my brother Scott called our cousin, Pete, and me “lumps,” because we wouldn’t stop playing Space Invaders and come outside.

Once, Scott and I ran through the house, out the back door, and up the hill to our house when the cops showed up, having heard the (illegal) fireworks we were exploding in the driveway with Pete, who just stood there.

One hot summer day, Pete and I played in the broiling attic, eating peanut butter sandwiches and playing board games, until we heard on the radio that it was one hundred degrees outside, and, therefore, probably more than that in the attic.

My uncle built the back patio, and took apart and then rebuilt his Porsche — inside the dining room. He let us play with his CB radio until someone complained that there were kids on the air, and he spent spring after spring losing the battle to keep the groundhog out of his garden.

Scott, Pete, and I drew elaborate towns in chalk on the driveway with roads and shops we’d visit on our bikes. Susie and I tied towels around our necks, and pretended to be Electra Woman and Dyna Girl, just like on TV. Then Aunt Nancy piled us into her brown, faux-paneled station wagon and took us for ice cream at Dairy Queen. On the first turn, Susie spilled her banana split all over the seat while the rest of us dove into the way back.

In high school, Pete’s friend left behind his drum set, which I commandeered while Pete played his electric guitar and sang into the mic. Amazingly, no one called the police, but if they had, I knew how to escape.

We played soccer next door in my grandparents’ yard until my cousins’ dog Maggie made off with the ball in her mouth, leaving us to chase her through my aunt’s pachysandra. Then we’d give up, and go inside to hang out with Aunt Nancy, as she nursed a Diet Pepsi and laughed at our jokes in the kitchen.

It was, as Pete said when he was little, a “lellow halse,” which Aunt Nancy had redecorated once she was done raising kids among piles of colorful plastic toys and Springsteen records and dog toys. It was where a crazy cat, fittingly named Kato, lived for a short time before his traffic-related demise, and where I was stung by a bee. It’s where all the grandkids — our kids — opened Christmas presents and hid in the pantry with a box of Ritz crackers and a picture book.

Sadly, it is also where Aunt Nancy died, too young and terribly fast, from cancer, in the living room, on hospice. Six months later, Uncle Peter died, too, and soon, the house went up for sale with a promise by the new owners to my cousin’s wife, the real estate agent who sold it, to take good care of it.

Then last weekend, just before Christmas would bring us all together at my parents’ house, the “lellow halse” that had been in our family for 41 years was leveled. A perfectly good, updated, lovely house, gone except for the chimneys. And the memories. And the tree planted when Susie came home after surgery at birth. Though that, too, is now marked for removal.

Our family’s house is gone. A perfectly good, updated, lovely house, gone. And our hearts are broken.

Posted in All in the family, Days Like This | Tagged family home, family memories | Leave a response