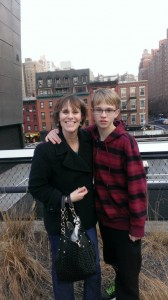 I’m running some old favorites while I’m at a certification program. Enjoy!

It went to remission – five years of it, so far.