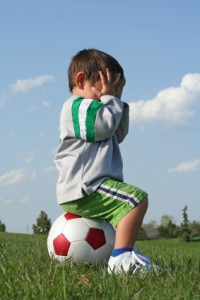 The way he was falling – nearly perfectly prone, arms flailing, alarmed expression on his face – made him look like Wile E. Coyote. Except he wasn’t falling off a cliff. Rather, he was about to land flat on his back in the corner of the soccer field where I was coaching practice for a group of fourth grade boys. When I heard the thud of his body on the ground, I rushed over.

“Are you okay?” I asked, concerned. The fallen boy was trying hard to hold back tears, but it was clear that tripping on the soccer ball and landing flat out on the half-grass, half-dirt soccer field had hurt quite a bit. I rubbed his back, but he pulled away and hid his face in his hands.

“That had to really hurt,” I empathized. “You looked like a cartoon character falling through the air.”

I told another coach what had happened, but he dismissed it, saying, “Aw, he’s tough, right?” The boy nodded, the agony on his face betraying his response, and we resumed the soccer drill as though nothing had happened.

I knew enough to let it go. I’d seen the very same sucking-up when I’d played street hockey with my brother and his friends in my grandparents’ driveway a few decades ago. One boy would get a hockey stick to the ear or the shin and go down, and then we’d all stand around, watching him writhe in pain, until another kid asked, “You okay, man?” The kid on the ground would get up and “shake it off,” and soon, we’d go back to playing hockey.

Generally, this was what would happen even when I played soccer with girls, except for one thing: There was more empathy to go around. A teammate would get slide-tackled from behind, and we’d gather around her as she held her injured leg and cried on the field. We’d offer her ice, assistance getting off the field, revenge – whatever she wanted. But we never expected her to suck it up unless she wanted to.

As the song says, “Big girls don’t cry,” but at least they’re allowed to. But boys? Apparently not. And it’s up to the bigger boys to get them ready for manhood by teaching them to suck it up now.

At the team’s soccer game the next day, I told the boy’s father what had happened.

“He looked like the Road Runner had just pushed him off the ledge,” I reported. He and his son both laughed, but I wondered what kind of pain the boy was really hiding – what they’re all hiding.

After the soccer game, I took my son to a deli for sandwiches. On the way out, he held the door open for a group of teenagers.

“Thank you, little man,” one of the boys said to him. And we all know, little men don’t cry.