Is Your Teen “Vaping” E-Cigarettes? 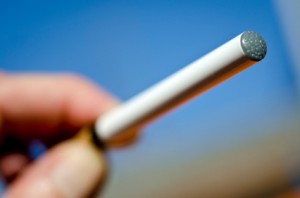 If I were a teenager today, I might think that using “vaping” (inhaling the vapors of) e-cigarettes is no big deal.

I mean, it’s not tobacco, right?

And it’s not regulated by the FDA. The grown-ups are still trying to figure out how to classify them with age restrictions on their sale in just half the U.S. states.

They deliver nicotine, an addictive substance that can make you euphoric. And who wouldn’t want to feel hap-hap-happy after a week of bio, algebra, and the hormonal cesspool that is middle and high school?

They’re being marketed as healthier solutions to cigarettes, because they lack tar and many of the cancer-causing chemicals found in tobacco products. So, they’re not as bad as cigarettes = must be okay. I mean, Katherine Heigl and David Letterman vaped on the air, making it all seem cool and no big deal because it’s helped her quit cigarettes, you see.

Plus, they’re being marketed with kid-friendly flavors like cherry crush and vanilla dreams.

And they don’t leave you stinking of tobacco, so there’s little to hide from your parents.

No wonder the use of electronic cigarettes by middle and high schoolers more than doubled between 2011 and 2012. They’re an easy-to-access high that’s currently under the radar of most parents and beyond the concern of government regulators.

Some of them actually deliver more nicotine than cigarettes do — 12 mcg vs. nine. E-hookahs, which deliver 500-700 puffs per unit, last longer.

Reports the Los Angeles Times: “According to the FDA, e-cigarettes contain many chemicals and ultrafine particles that can become embedded in the lungs, just as regular cigarettes do.”

They are becoming a new gateway to traditional cigarettes, say anti-tobacco groups, by glamorizing smoking.

They are known as “battery-operated nicotine delivery systems,”  involving inhaling vapor or mist.

Katherine Heigl says she’s totally addicted to e-cigarettes and they “aren’t bad for you,” even though she admits she has no idea whether nicotine is really bad for you. Then she said it’s no worse than caffeine. Then Letterman said he felt a little loopy.

So, compared to cigarettes, vaping is less dangerous.

Compared to not vaping, it’s not. And nicotine really is more dangerous than caffeine. As Livestrong.com reports:

According to the National Institutes on Drug Abuse,  nicotine is as addictive as heroin or cocaine, with a cessation rate of only one  in 10 among smokers who started before the age of 21.  It increases levels of  the neurotransmitter dopamine—the brain’s reward chemical—reinforcing the  need to use the substance repeatedly.  It also causes severe withdrawal symptoms  upon cessation, some of which include anxiety, increased appetite, irritability  and intense cravings for the drug.

Caffeine, on the other hand, is “considerably less” addicting and far easier to quit, what without all that heroin and cocaine level addiction going on and all.

So, if you’re a teen thinking of vaping because the grown-ups haven’t figure it out yet, and your friends say it’s no big deal, think for yourself. You’ll be hap-hap-happier when you don’t have to break a nicotine addiction in a few years.

Posted in In the News | Tagged ecigs, vaping | 10 Responses

10 responses to “Is Your Teen “Vaping” E-Cigarettes?”