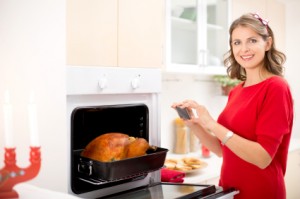 Martha Stewart has gone and dissed bloggers on Bloomberg TV, asking, “Who are these bloggers?” in a tone that she might use when encountering a cheap brand of crème fraiche. She said that bloggers create a “kind of popularity, but they are not experts” like editors at Vogue magazine, for instance.

It’s not a good thing. And yet, she has a point that bloggers (and journalists) need to hear.

I have long been sitting in that curious spot between traditional journalism and blogging. While I write for mainstream magazines and newspapers (they’re like web sites, but on paper), as well as the Internet, I have also been a blogger since I flipped the switch on MommaSaid.net on January 20, 2003.

I’ve written books both for major publishing houses and soon, for me in a self-published ebook.

I’ve keynoted the American Society of Journalists and Authors’ annual conference, and I’ve also served as a panelist at Mom 2.0.

I’m a blogger. I’m a journalist. And yes, Ms. Stewart, I’m an expert. What is an expert? I looked at two definitions (both online, because I no longer own a printed dictionary.) I offer the Dictionary.com definition for the bloggers, and the Miriam-Webster one for the journalists who will likely scoff at my pedestrian use of Dictionary.com:

Dictionary.com: “a person who has a special skill or knowledge in some particular field; specialist; authority.”

Miriam-Webster: “having or showing special skill or knowledge because of what you have been taught or what you have experienced.”

I’d venture to say that if you write frequently about how to turn pine cones into cute table place markers or offer up assorted cheese-based recipes for game day gatherings, that makes you someone with a special skill because of what you have experienced. You know, an expert.

It doesn’t make you an editor at Vogue, which requires a different set of skills. Judging by the continual layoffs of my editor friends, those skills need to include updating your own resume.

Journalism is dying, and blogging is partially to blame.

When your mother shared her kitchen-tested recipes with her friends, it was a hobby. When Martha Stewart did it — buoyed by perfect pre-Internet timing and unwavering ambition — it grew to an empire. When you do it on your blog and tweet, Pinterest, Instagram, Tumblr, and Facebook it, a little piece of Martha Stewart dies.

Why? Because thanks to the Internet, you have broadcasting power that your mother (and before the magazine and TV deal, Martha) didn’t. The Internet has leveled the playing field for anyone interested in sharing information, while simultaneously making it harder and harder for people who used to get paid to share this information to make a living at it.

It’s simple supply and demand economics, and Internet economics have made it increasingly difficult for traditional media to stay afloat. Just a year ago, Ms. Stewart had to lay off about 10% of her print employees, leaving my editor friends to update those resumes — but for what?

Freelancer writers like me have seen our pay cut. Back in 2001, I was paid $2,000 for a 700-word essay that ran in Woman’s Day magazine. Last year, I was offered $173 to write a 20-slide (more clicks matter!) online piece for a major web conglomerate that required me to interview three experts and do my own fact-checking. And that’s not an anomaly. Freelance budgets have dried up or simply don’t exist, with compensation sometimes in the form of “exposure.” (Cough, cough, Huffington Post.)

Serious bloggers — that 10% or so who are in it to win it — need to be mindful of what has happened to their journalist cousins. Chances are, you’re sharing your expertise for free on the Net in the hopes that you’ll get a pay day from, quite ironically, traditional media, in the form of a book deal or a TV Show. (Props to Pioneer Woman and the Bloggess.)

When it comes to sharing expertise and selling ideas, the rules have changed and are still changing. It’s the ones who figure out how to ride that roller coaster who’ll laugh all the way to the bank, or, more likely, Paypal.

So bloggers, if you’re wondering why Martha Stewart refers to you using the same voice she uses when faced with cheap Chinese glitter, it’s because you’re taking money out of her pocket. (Presumably this doesn’t apply to “Martha’s Circle,” which is “a community of the Web’s leading lifestyle blogs, chosen by Martha Stewart editors.”)

Your readers want your expert advice instead of Martha’s because you live the way they do. Unlike Martha Stewart, you’re relatable and authentic, and that’s helped you build your following. Getting paid for your expertise, however, isn’t that easy to do anymore.

And that’s not a good thing.

5 responses to “Why Martha Stewart (and Journalism) Slammed Bloggers”