What if the Air Soft Gun School Suspension Wasn’t About Politics? 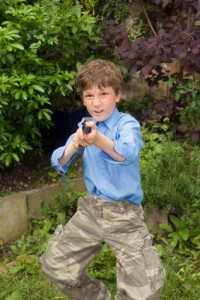 Not at the school bus stop.

Not on the bus.

Not at unsuspecting passers-by.

At each other, on one kid’s property, in an Air Soft war much like the ones kids all over America have.

Cue the indignant conservative pundits, who, frankly have a point. Since when can the school system dole out punishment for infractions that happen off school property? Uh, well, when we ask them to help stop online bullying. That said, the school system here jumped in before the parents could. Then a parenting issue turned into a political one.

The middle school boys were playing with their Air Soft guns, which shoot plastic pellets, in one boy’s yard. The guns look like real guns, only with an orange tip that’s supposed to indicated that they are, essentially, toys. In many states including Virginia, it is legal to own and shoot these guns on your own property.

I know this, because my sons have these types of guns. They have ones that look like handguns and ones that look like rifles. They had one that looked like a 1920’s gangster’s tommy gun but the ammo drum broke. (Thankfully, as that thing shot so many Air Soft pellets per round, they may as well have shot dollar bills into the woods. Same result.) They have taken part in Air Soft wars in yards and privately owned woods around town, and they have shot at targets in our yard.

Anyhow, a neighbor in the Virginia case called 911 on the middle school kids who were shooting at each other, even though their parents had forbidden it when they aren’t around. A 16-year-old sister was in charge that morning, but in fairness to her, you can’t be everywhere at once, and these kids were old enough to get themselves to the bus stop. The boys should have followed their parents’ rules, but they didn’t.

In the 911 call, the neighbor admitted that she knew the guns the boys were shooting were just toys, but that the sight of boys shooting guns, she explained, made her uncomfortable.

And with good reason, as there have been an awful lot of shootings with real guns lately. Cue the indignant liberal pundits, who frankly have a point. People shoot people with real guns. Why encourage that, even in play, among children?

I personally have rather reluctantly let my kids play with Air Soft guns, but the older they get, the more content I am that they are losing interest in them. When there were five-foot-tall, pre-pubescent boys, the odds that a neighbor or a police officer, both carrying guns, would mistake the boys for thugs with real guns that shoot real bullets was slim. But now that they look and sound like men, their odds of being shot over a toy gun increases.

One such teen was arrested and charged with firearms possession this week on school property here in New Jersey for shooting his Air Soft gun at kids in a football practice, a far better outcome for his illegal and asinine prank than being shot by police.

I propose that we keep politics out of the whole thing and instead, insert some common sense. How about if all toy guns actually look like toy guns, not real ones? Perhaps in hot pink, both to alert police and neighbors that the guns are fake while simultaneously supporting breast cancer research?

How about if school systems work with parents to dole out punishment for not following the rules?

How about if we parents all lock up the Air Soft guns and let the kids play with them only under supervision? I’ll start by digging ours up out of the garage right now.

This nation has become so quick to make issues black and white when really, they are varying shades of gray. Let’s stop pointing fingers for a minute and look at where we all can make changes for what shouldn’t be a political issue at all, but a safety one.

Posted in America the Beautiful, In the News | Tagged parenting, safety, school | 3 Responses

3 responses to “What if the Air Soft Gun School Suspension Wasn’t About Politics?”