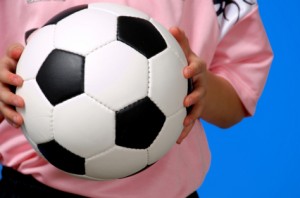 There were 10 of them, but at times, it felt like a lot more, especially when they surrounded me in their pink soccer jerseys and complained of yet another injustice that the purple team had perpetrated.

That the other team had named themselves “The Fashion Models” was just one clue that, after a decade of coaching boys, I was going to have a different experience while coaching girls — especially six year-old girls. I was filling in for a neighbor who had coached our sons’ recreation soccer team with me years ago. Last week, he was away on business, so he asked me to fill in as the coach of his daughter’s first grade rec team.

I am still recuperating.

I tried to learn all the names of the girls on the team — I really did — but they moved around so quickly and generally in a small herd that chased after the ball that it was hard to discern who was Sophie and who was one of the Samanthas, of which there were three. I think.

Instead I called them by their numbers, which they didn’t know, having received their jerseys just prior to kick-off, leaving me to run after them, shouting their numbers even more loudly. Which, oddly, also didn’t work.

Half the team decided to call themselves Pink Bubble Gum, while the others, inspired by a (true!) story by one (of the many) blonde girls about river dolphins that turn pink, called themselves the Pink Dolphins. To avoid controversy, I resorted to shouting “Go, Pink!”

We spent much of the game watching the other team kick the ball into our goal, while I reminded myself that, though the coaches run on the field during games at this level of play, they are not allowed to boot the ball away from the goal while everyone else, including the goalie, watches it. No matter how painful it is to watch the ball roll ever so slowly across your team’s goal line.

Every few plays I would hear about the injustice that, let’s call her “#22,” was administering.

“Number 22 kicked my leg!” one girl in pink STOPPED PLAYING SOCCER to complain to me, while a girl in purple dribbled the ball past us toward the goal.

“Yeah, she hit me too!” another blonde in pink STOPPED PLAYING SOCCER to insist while another purple jersey swished by us toward the ball.

“She hit me two times!” yet another girl in pink STOPPED PLAYING SOCCER to report to me while the purple team ran by.

Now, I played college soccer where you stopped playing soccer only if you couldn’t physically get up from the field, perhaps with a broken bone or a concussion, or when the other team’s goalie had piled on top of you in a harried scrum to get the ball.

So it took all the self-restraint I could muster not to slide-tackle the ball away from the purple’s offense, despite the fact they were no taller than my ribs and younger than my cleats.

In the chaos, the Fashion Models scored a(nother) goal.

I reminded Pink to complain to the ref, not to me, and then I told the ref that #22 seemed to think that we were playing in the World Cup Soccer final before a crowd of 80,000. Perhaps he could explain to #22 why she shouldn’t be throwing elbows at a team that had named itself after gum. Also, dolphins.

I spent much of the rest of the game doing exactly what I’d done for my son’s first grade rec team: demonstrating proper throw-ins, directing goal kicks, and cheering them on.

I couldn’t decipher this particular injustice among the simultaneous complaints, but I didn’t care what it was. I shouted to the ref and the Fashion Model’s coach, “You gotta tell #22 to stop clocking my players!”

The purple coach crouched down to explain to #22 why six year-olds don’t play like Mia Hamm channeling Mike Tyson, while the ref finally, blessedly, blew his whistle.

I felt vindicated. At last, my team would get the justice they deserved, and we could go about the business of playing soccer. But when I tried to get to the ball to set it up for the kick, I was quickly surrounded by nearly all the pink jerseys I’d handed out before the game. Every single girl was complaining about #22.

“I know,” I tried to explain. “You’re getting a free kick because of it.” I pushed my way through the sea of pink, picked up the ball, and placed it down where #22’s latest crime had been committed. I tried to pick a player for the kick, but no one could hear me over their complaints. I gave it another try.

“The referee says we get to kick the ball now and #22 is in trouble,” I translated from soccer into first grade girl. But they kept telling me about elbows and assorted boo-boos, some administered by the now infamous #22, others simply a consequence playing the sport of soccer with people who don’t really know what they’re doing.

In all my years of coaching boys’ soccer, I’d never seen anything like it. With boys, you tell them, “You get to kick the ball!” and point toward the other team’s goal, and they forget that someone had just punched them in the nose and dash off like puppies with short-term memory issues.

But this, this was something entirely different. It was more like herding little lawyers: A free kick wasn’t enough for them. They seemed to want an apology and public service for the offender. Judging by the kid in tears, nothing short of a stint in juvie for the offender would have made her feel like justice was served.

My son, now almost 15, laughed at me from the sidelines, and suddenly, I missed his team — even the times they pantsed one another during the pre-game check-in while I chastised them in front of the referee.

Finally, one of the Samanthas (I think) kicked the ball, and we were back to playing soccer.

But soon, the second 20-minute half came to a close, and we lost 5-0. I marshaled my pink team through the post-game handshake line, reminding them to say “good game” to each player.

As I headed toward my car, I could hear the pink team lodging complaints to their parents, and I realized why coaching first grade girls had felt so taxing after years of coaching teenage boys: I was out of my league.