What I Would Have Added on Fox News This Morning 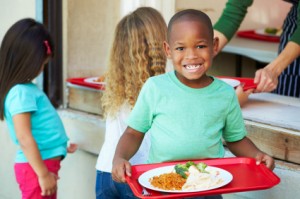 That we’re fighting over chicken nuggets and tater tots is another issue for another day.

When you have a three-minute TV segment that you share with an anchor and another guest, you get about seven sentences to make your point and a few seconds to admire your professionally applied makeup in the prompter.

As such, here is what I would have added on the set of Fox & Friends this morning about the school that will no longer offer free lunches to kids whose accounts are out of funds had there been more time:

1. Sometimes, we have to step in for irresponsible parents. Yes, parents should be held responsible for making sure their kids have money for school lunch, or if applicable, that they sign up for the free lunch program. But before we “should” all over ourselves, let’s face it: Some parents just aren’t that responsible and never will be. I don’t think that dumping out a kid’s lunch because Mom or Dad can’t or won’t take care of feeding them lunch does anyone any good, least of all the kids. Give them a cheese sandwich and an IOU instead. It’s humane. And if that gets too costly, find another way that doesn’t involve the kids.

2. It’s a complicated issue. And it’s one that really can’t be boiled down to seven sentences, but consider this: Some eligible parents don’t sign their kids up for the free lunch program because English isn’t their first language and they can’t read the forms. Others are ashamed to admit they need the help, while still others refuse to share their income information with the school system. Others don’t qualify for free lunch but still can’t afford lunch for their kids. It’s not as simple as “Some parents are lazy,” though that’s certainly true, too, in some cases. Boston solved the problem by offering free lunches to all kids through a Department of Agriculture program. In areas with high concentrations of kids who qualify for free lunches, perhaps this is a better solution than turning schools into debt collectors.

3. The kids are pawns in a game they shouldn’t be playing. The school system is losing money because certain parents aren’t paying their share or signing up for federally funded free lunches. So, the money has to come from elsewhere in the budget.  This particular school system has decided the solution is to shame kids by dumping their lunches in the garbage. Some may urge their parents to resolve the issue, and in some cases, it may work. But a first grader — or third grader, or fifth grader, or high schooler — shouldn’t have to parent themselves so they can get fed. And who knows what the emotional consequences are for such a thing? I dunno, but I bet it’s more costly than a free cheese sandwich. Chances are, the answer will be that a kindly teacher or lunch lady will buy certain kids’ lunches throughout the year. Many already do.

NOTE: Fox News didn’t post my segment, but they did post the one for the Internet sensation, Jiff the Dog, who sat in the very same makeup chair I did just moments earlier. He is just so cute! See for yourself: