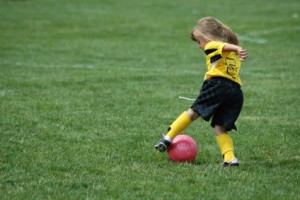 Who you calling a foot fairy?

“Did he just call you two ‘foot fairies?'” I asked my son and his friend who were waiting in my car with me for cross country practice to end, so we could pick up my other son and go home. One of the runners from their class had passed by my car, offering up his assessment of his friends.

“Yeah, that’s what they call the soccer players,” my son replied.

Foot fairies? This soccer coach/player was mildly offended, though appreciative of the alliteration.

“The football team started it,” he added. In fact, this is nothing new. According to the Dictionary Words You Should Never Google, a.k.a. the Urban Dictionary, a foot fairy is “a person who plays soccer thinking it’s tougher than football.” One gentleman who calls himself “Annoyed Football Beast” added, “They have a wide misconception that all of us are just barbarians who run into each other.”

Why the age-old Football v. Futbol fight has spilled over to our high school cross country team, I don’t understand, and I don’t like it.

“What do you call the cross country runners?” I asked, but they had no retort.

So I wrote one for them: “Road wankers.” It sort of flew out of my mouth, as though I was one of the high school soccer players and not one of the soccer moms….not to mention one of the cross country moms, like I, in fact, am.

What’s more, it stuck awfully fast, the sign of a solid, sustainable insult that will spread quickly and thoroughly for years to come, perhaps even earning a spot on Urban Dictionary by the next World Cup.

In review: Ten years ago, I taught little soccer players how to dribble and pass soccer balls the size of their lower legs, and now I am ghostwriting insults for them to hurl at other sports-playing children. including my own.

“Foot fairies” simply touched a nerve for me. I started playing soccer when Pele and the North American Soccer League first brought the sport (called “football” everywhere but here) to America. My town’s boys’ soccer team played second fiddle to the town’s football team, while we girls either had to play for the boys’ team or fight for our own fields.

Back then, soccer was ridiculed for its low-scoring games and lack of lulls in the action required for commercial breaks. Our parents never played the sport, and our grandparents wondered why we couldn’t use our hands.

Even in recent years, Europeans like actor (and hooker enthusiast) Hugh Grant have attempted to ridicule American soccer by calling it a “girls’ sport,” because the U.S. Women’s team has won more Olympic medals (four) and World Cups (two)  than the U.S. Men (zero). What’s more, my favorite fake TV pundit Stephen Colbert has asked, “Is it time to care about soccer?”, in a segment during which he mocked soccer fan scarves and fell asleep.

Foot fairies? We fought for this sport in this country, while the rest of the world riots at it. Watch who you’re calling names, kid. We might just come up with a worse one for you. Oh wait. We already have.