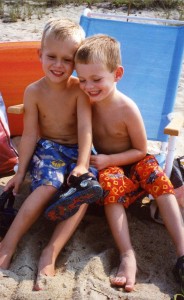 Before they could fend for themselves.

Yesterday, my 16 year-old asked a question that seemed like a new concept to him:

TEEN: “What did you do with us when we were little and you had to go somewhere?”

ME: “I left you at home with the remote and a bag of chips….Was that wrong?”

TEEN: (laughter) “No, I mean when we were babies.”

Now, here’s where I could have gone on all snarky, laughing at him for just now — a decade-plus later — realizing how I couldn’t go anywhere or do anything without taking them along or leaving them with someone else after extensive planning and orchestrating. I could have said, “My God! What did you think I did?” And then I could have complained about putting my life (and often, my lunch and my bathroom breaks) on hold to raise him and his little brother. But I didn’t, because here’s the thing: He recognized my sacrifice.

ME: “Babies, little kids. For years, I took you to my doctor’s appointments, the supermarket, to try on clothes while you two stuck your heads under other people’s dressing rooms to say hello.”

ME: “Once a week, Omi came up to watch you. I tried to take care of as much as I could in that day so I wouldn’t have to juggle you two on my lap during haircuts.”

And when one of them suddenly came down with the stomach flu, I made it to the bathroom at Barnes & Noble just in time.

And I started a business while they weren’t in school at the same time. (Morning preschool, afternoon kindergarten.)

And I hobbled down the street behind them to the school bus stop just two weeks after major abdominal surgery.

I did what parents do to raise their children: I sacrificed time and freedom. I postponed things and cancelled others. I daydreamed about sleep, and I dreamed about pulling my kids out from under other people’s dressing rooms.

No wait…that wasn’t a dream.

I didn’t leave them home with the remote and a bag of chips. (Not until they were old enough, anyhow.)

But I’m so glad you asked, dear son. I have so much to tell you…

2 responses to “While You Were Little”