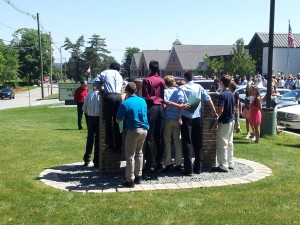 I made the goalie’s mother cry. That wasn’t my intention when I sent the following e-mail to the parents of the U-14 boys’ soccer team I’ve coached the past four years, on the night before the middle school graduation:

Dear Renegades Parents: I hope you will indulge me…I would like to invite your kids to meet us …. after graduation tomorrow for a Renegades grad photo. I feel like 18 of my children are graduating – from middle school and the Renegades. I would like to capture the moment, preferably without the need for ice packs or Band Aids!

After the graduation ceremony ended, I headed outside to look for the team, only they found me instead.

“Momma Ding Ding!” they shouted the nickname they’d awarded me last year, a combination of Singer-turned-Dinger-turned “Ding Ding” and my web site’s name. Then they proceeded to sandwich me in a giant, Axe-scented, group hug. One of my midfielders started to pick me up.

“I am in a skirt!” I protested, and he put me down, laughing.

The boys on my soccer team were just fourth graders when I “inherited” them the year my son joined the team and the Renegades’ three coaches let me help out. Over the years, coaches retired or moved on, and my responsibilities increased. I went from commenting on the defense at practices to being the number two coach and first line in First Aid at games — and there was a lot of First Aid required. I tended to slide tackle burns, aching Achilles, and one long cut so deep, it reminded me of a morgue scene from CSI. At one point, I benched so many head injuries, we started calling ourselves the Kinnelon Concussions.

There were the practices when Coach Jen played defense and showed the boys a thing or two, and one where I played goalie and fell flat in the mud while the everyone laughed heartily. There were trips to away games, my car full of kids jamming out to the songs on my iPod and leaving crumbs from all over the floor from our 7-Eleven stop . Or the ones when the boys opened my car windows and shouted to passers-by while I pretended not to be involved.

Then there were the games on boiling hot turf. The ones in the rain and the snow. The ones where my son got his first, then his second red card simply for defending the goal. (I swear!) The ones when I had to get between the head coach and the ref and calm everyone the hell down. The ones we won, and the ones we lost. The ones we should have lost, but somehow pulled off a win with seconds to spare, as the boys collapsed into a heap of cheers on top of the forward who scored the winning goal.

In my four years with the team, these boys grew from children to young men, and I will miss coaching them. I will still get to some of them play on the high school team, but my days of being their coach are over, and it’s bittersweet. On the one hand, I no longer have the urge to yell “GET THAT BALL OUTTA THERE!” On the other, I feel like a wonderful chapter in my life as a parent has come to a close. And that, I admit, makes me cry.