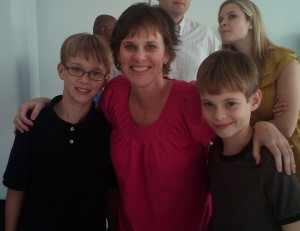 My kids and me, in the early remission years

Right about now six years ago today, the first drips of caustic orangey-red chemotherapy drugs began entering my body through tubing under the skin of my left arm.

I was in the hospital in New York City. My kids were in school some 30 miles away, finishing up their school years, packing up art projects and math dittos to bring home. But I wasn’t there to sift through them.

I still had my hair and my week-old habit of checking in with God every ten minutes or so, asking Him to let me stick around long enough to see my boys, then ages 8 and 10, grow up.

I didn’t ask for those years leading up to adulthood to be trouble-free. That would be presumptuous. Selfish. Unrealistic. After all, beggars can’t be choosers, and I was begging for my life.

When my prayers were answered the following January with remission, I wondered if I’d ruined my kids’ childhoods by saddling them with something so very difficult while they were so very young.

We were still grappling with the truth — Mom had almost died. And we were facing life in small chunks of time, the three months between PET scans to see if my non-Hodgkin’s lymphoma had returned. In the second year, we endured every four months between scans. Then, six months, each year until last fall, when I reached five years in remission — “cured” by some medical standards.

None of it was trouble-free. It got easier, then harder, then easier, then really, really hard when my husband and I separated two years ago. This past weekend, he packed up his stuff, which I’d filled the garage with, and moved it out for good. In a few weeks, we will officially be divorced.

Yet despite two very difficult “life stressors,” as the psychology community euphemistically calls the crap-storms that are cancer and divorce, I no longer worry that my kids’ childhoods have been ruined. Rather, their adulthoods have been primed for a far healthier and effective way of dealing with the troubled times that come with life on earth.

Together, we have learned how to acknowledge our feelings, hear them, give them company, and validate them. We don’t mask them and we sure as heck don’t stuff, swallow, or talk ourselves out of them, because when you do, bad things can happen. This, we know for certain. This, we have seen for ourselves.

We have learned to talk and to listen — truly listen, not shame and blame or find and fix. We have learned to lead emotionally healthy lives. But if it weren’t for the bad times, I’m not sure we would have. For this, I am truly grateful.

Last weekend, I texted my now 14-year-old son after he’d left a paintball party to ask how it went.

He replied, “Awesome, yet at times, painful.”

6 responses to “Awesome, Yet at Times, Painful”