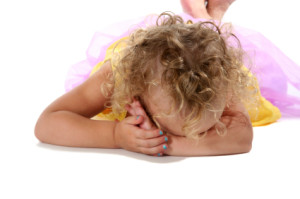 Somewhere in one of my blogs or books is a story about a no good, miserable day shopping with my cranky, whiny toddler in a warehouse store which ended with the following scene:

Checkout guy: “Would you like me to put a smiley face on your receipt?”

Me: (gesturing toward my cranky, whiny toddler) “Can you put it on his forehead? It’d be the only smile on his face all day.”

Back then, we didn’t have Tumblr or Facebook or Instagram to post photos of our cranky, whiny toddlers and share them with the world, like over at Reasons My Son is Crying. The Tumblr account, created in April by a Rochester, NY, dad of two sons to share his very understandable parenting frustration with friends, has gone viral, attracting frustrated parents everywhere  who now submit their own photos and reasons their kids are crying.

Some of the reasons include:

“He’s crying because I wouldn’t let him drown in this pond.”

“A fly landed near him.”

It’s one thing to share your frustration about your toddler’s seemingly odd and often exhausting behavior with other parents, and quite another to photograph them mid-meltdown and then post it. It says to a child, “Your misery is for my amusement.” And when Tumblr is involved, it says, “Your misery is for my amusement and those of my friends and total strangers, over and over and over again.”

Greg Pembroke, the dad who created the Tumblr, said he never expected it to become Good Morning America material, but he didn’t turn down the opportunity to sit on their couch with his kids and declare he’ll keep on chronicling reasons his kids cry until “it’s no longer fun for the boys.”

Um, Daddy? That moment has passed. I look forward to “Reasons My Teens are Inviting Dad to Therapy.”

Posted in All in the family, Days Like This, In the News | Tagged raising toddlers, social media children, temper tantrums | 4 Responses

4 responses to “Reasons My Son is Crying = Future Therapy”