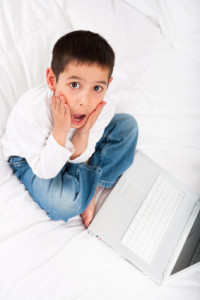 I didn’t believe it when I read the headline, and I still don’t:

The story ran today as an exclusive on USA Today’s Cybertruth, with no link to the original survey by Bitdefender, a Bucharest-based antivirus company. (I have emailed the company for a copy of the survey results, but I haven’t heard back as of yet.)

Cookies, you say? What’s the harm in cookies? Well I had to cover his eyes to protect what came up, image after image that ultimately crashed my computer as I frantically tried to shut it down. (If you really must know, go to Urban Dictionary and look it up.)

Posted in All in the family, America the Beautiful, In the News | Tagged digital kids, online | Leave a response